French designer Ora Ïto has cut and pieced together over 400 wooden slats to create this staircase, which twists up the Paris offices for one of the world's largest luxury companies.

Ïto was tasked to design offices for the media division of LVMH, the parent company of luxury brands including Louis Vuitton and Dior. The department, which encompasses news brands Le Parisien and Les Echos, has its head offices located on 10 Grenelle in Paris' 15th arrondissement.

The staircase snakes up the four storeys of the office, comprising 429 wooden battens that cradle the underside of the stair and form the handrails on either side.

Curved edges detail each of the slats, so that when placed side-by-side, they form wave-like indents across the stair.

"I wanted the staircase to be the centrepiece of the building," said Ïto. "This creature undulates in the space, shaping and pervading it."

"This huge half-whale and half-snake chimera, snatches you, swallows you up and spits you out at the right floor," he added.

There is also a semi-circular indent on the inner side of the slats that forms a nook for the steel handrail, while LED lights illuminate the undersides of the stair treads.

A large hidden steel beam supports the slats, which are made of a mix of materials so they are as light as possible. Two layers of medium density fibreboard (MDF) are placed either side of a metal reinforcement and then covered in the French oak veneer to match the oak steps.

Lit by a huge glass wall and a roof light, the staircase is set to one side of the building, leaving plenty of open space around it.

Ïto also designed the surrounding areas as part of project, using the wooden slats to form walls of the auditorium on the lowest floor. He also created the reception desk on the entrance level from the timber elements, tapering the shape at the rear to form a tail.

Minimal finishes including bright white walls and flooring provide the backdrop to the stair. White columns support the upper levels, where curved balconies with glazed balustrades extend towards the staircase.

"The offices are intentionally minimalist, calm and functional without extraneous decor," said the designer. "The refined details are unobtrusive."

The staircase adds to a diverse portfolio of work by Ïto, following his tram designs for the Mediterranean city of Nice, a spaceship and a sedan chair for car manufacturer Citroën and a trainer based on the work of Modernist furniture designers Charles and Ray Eames.

Other spectacular staircases recently featured on Dezeen include one made from hundreds of plywood pieces slotted together like a jigsaw and a chunky, concrete spiral stair. 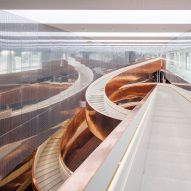 Photography is by We Are Contents.