Dezeen has teamed up with the Design Museum in London to give away five pairs of tickets to the Beazley Designs of the Year show.

This competition is now closed. Congratulations to the winners, which are Jay Lancaster, Almudena Castro, Frances McMichael, Tim Cheema and John Simon Perring, all from London, United Kingdom.

Dezeen is media partner for the annual awards programme, which celebrates design that "promote or delivers change, enables access, extends design practice or captures the spirit of the year".

For the 2017 awards, there are 62 nominees split across six categories – architecture, digital, fashion, graphics, product and transport.

The shortlisted projects are currently on show at the Design Museum building in Kensington. They are being presented in a cave-like space designed by London studio Carmody Groarke.

Five competition winners will each receive a pair of tickets to visit the exhibition, which runs until 28 January 2018.

The product category includes a number of sustainability-focused projects, such as the biodegradable Flax Chair by designer Christien Meindertsma and a range of pens with ink made from carbon emissions taken from vehicles and chimneys.

Architecture nominations include the Port House by Zaha Hadid Architects and the Smithsonian National Museum of African American History and Culture by Adjaye Associates.

An overall Designs of the Year winner, as well as a winner in each category, will be announced on 25 January 2018.

In a movie recently produced by Dezeen, Design Museum director Deyan Sudjic admitted that it was a "howling error" that the iPhone didn't win Design of the Year in 2008. Despite being nominated, it lost out to the Yves Behar-designed One Laptop Per Child project, an affordable laptop aimed at children in developing countries.

Other previous winners have included the 2012 Olympic Torch, the Heydar Aliyev Center by Zaha Hadid and Human Organs-on-Chips – a microdevice lined with living human cells to mimic the complex tissue structures of the human body. 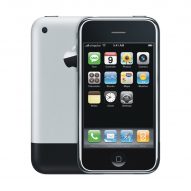 It was "a howling error" that the iPhone didn't win Design of the Year in 2008, says Deyan Sudjic