Dutch designer Ineke Hans has designed a steam-bent conference chair for one of its Austria's most important art galleries, which is manufactured using both manual and digital production methods.

Commissioned by the Kunsthalle Wien, the stacking chair is produced from beech, by local Austrian furniture brand Gebrüder Thonet Wien.

Its framework made using steam bending wood. But the perforated star-shaped pattern on the chair's seat is laser cut, and the arms, back and seat joints are all CNC cut to make the production process more economical.

Ineke Hans sees the chair as the perfect marriage of heritage and efficiency.

"The chair is partly made via one of the first mass production processes for furniture: steam-bending wood," reads a statement from her studio. "This process is still vital but, looking at production nowadays, it is regarded as a process with a lot of hand work."

"To counterbalance costs and to make a viable product today, it needed different solutions. Therefore also digital means of production are applied," it said.

Gebrüder Thonet Wien has a history of producing steam-bent beech-wood chairs for cultural venues in the city.

It is one of two companies borne out of the original Thonet brand, which was established by German designer Michael Thonet in 1819. The company worked with Adolf Loos to create the Loos Café Museum chair in 1898, for the Café Museum in Vienna. And in 1906 it partnered with Otto Wagner to produce the Postsparkasse series for the headquarters of the Post Office Savings Bank in Vienna.

"Apart from practical and technical considerations the story is also very much about designer, maker and client," added her studio.

"The combination of a designed chair for a cultural Viennese spot and Gebrüder Thonet Vienna as a manufacturer gives the project a historical touch, and a profound and meaningful depth that goes further than designing again another chair."

As for the chair's perforated star-shaped pattern, Hans told Dezeen: "Some old Thonet chairs have embossed seat patterns and I thought that this seat could also do with a pattern. It relates back to perforated patterns that were also used at that time."

The chair was first showcased at Hans' solo exhibition 'Was ist Loos?' at Kunsthalle Wien am Karlsplatz, which opened earlier this year. The exhibition explored the status quo of design todays through Hans' furniture product designs, and research.

Other chairs in the exhibition included the yellow Plouf seating for Belgian brand Moome, designed to be as comfortable as a beanbag, and some of the pieces designed for the Fogo Island hotel in Canada. 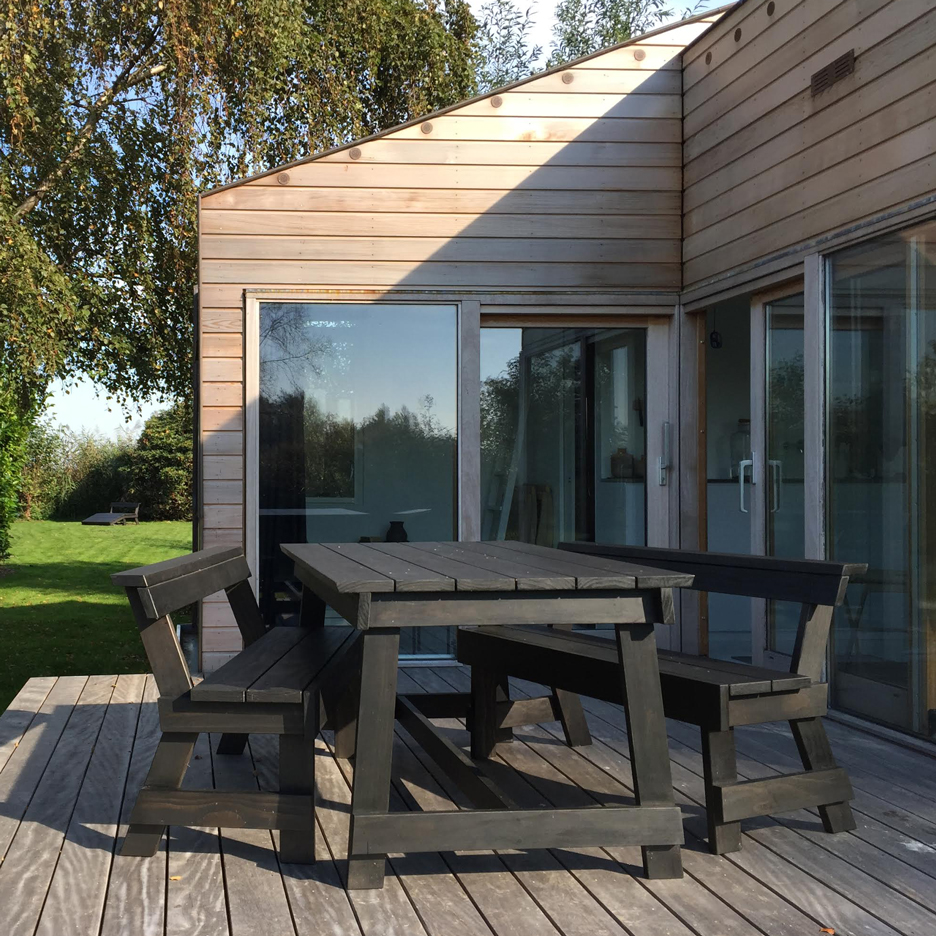 Ineke Hans' Berit outdoor furniture slots together when not in use