Presented at this year's Interior Design Show Toronto, the Altered States installation marks the first in a series of collaborations that will take place between Snarkitecture and Caesarstone this year.

It comprises a set of kitchen islands, each made from a different version of the brand's quartz surface material. The designs are crafted to reference water in various states, including glaciers, rivers and geysers, and impressive natural landscapes.

Among the collection is the Ice Island, featuring 37 layers of black Caesarstone curved up around a central sphere of ice. The frozen globe is cooled from below, but gradually melts when touched by visitors.

Water Island comprises 28 undulating levels of grey Caesarstone around a fountain, while water vapour rises from a circular cavern at the centre of Steam Island, formed from 28 sheets of a white material.

"As architects, we at Snarkitecture tend to be very material-oriented," said studio partner Benjamin Porto. "This collaboration gives us the opportunity to engage and interact with the Caesarstone material, something we would like to pass on to visitors of the installation, demonstrating the versatility and quality of Caesarstone surfaces."

The company has partnered with a host of well-known architects and designers over the past five years – including Nendo, Raw Edges, Philippe Malouin, Tom Dixon and Jaime Hayón – to produce designs using its materials.

This year's ongoing collaboration with Snarkitecture will solely focus on kitchen island design. The duo's next project will be a large-scale installation to be exhibited during Milan design week in April.

"The theme of the kitchen island resonated with us from the very beginning because of the understanding that the kitchen is the social hub of the house," said Snarkitecture partner and co-founder Alex Mustonen. "This idea aligns with Snarkitecture's goal of creating environments and experiences that are designed to be inclusive."

Mustonen co-founded Snarkitecture with Daniel Arsham in 2008. The architecture studio has completed a number of high-profile collaborations, like a snaking marble runway for fashion brand COS. Arsham also recently teamed up with Adidas on a three-part shoe series.

The Interior Design Show Toronto took place at the Metro Toronto Convention Centre last week, from 18 to 21 January 2018. Other launches at the event included a set of small pendants and sconces designed by New York brand Pelle. 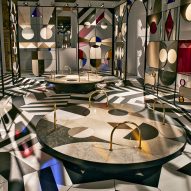