Caesarstone's Stone Age Folk exhibition, which ran from 4 to 8 April during Milan design week, featured a pavilion by Hayon constructed within the ballroom of Palazzo Serbelloni, a neoclassical palace built in the 18th century.

Hayon combined 48 variations of Caesarstone's quartz material – more commonly used for countertops in kitchens or bathrooms – with stained glass and metal to create the pavilion. It comprised a series of frames featuring abstract depictions of faces inspired by folklore from around the world.

"We have divided the space with these frames made from metal," Hayon explains in the movie.

"Faces emerge from the frames. Every face and every character I have created is different."

Hayon says his intention was to showcase how Caesarstone's material could be used "at an architectural scale." 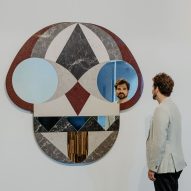 "Caesarstone is a really interesting material," he says. "You have CNC machines that can cut it extremely sharply and you have the technology to combine it in perfection with nothing to spare. [The installation] shows the ability of the material to go into any form."

Stone Age Folk featured two merry-go-rounds inside the pavilion – also featuring faces made from Caesarstone – allowing visitors to take in the different shapes, colours and textures in the installation from all angels.

"Everybody is going to look at the material, but the masks are looking at you," Hayon says.

Stone Age Folk is the latest in a series of collaborations between the Spanish designer and Caesarstone, which Hayon describes as "21st-century marquetry."

It follows on from an exhibition at the Interior Design Show (IDS) in Toronto earlier this year featuring a series of tables and cabinets made from panels of Caesarstone, some of which were also showcased in Milan.

But Hayon says the idea for the pavilion goes back to an earlier collaboration with the brand in 2016, when he created an original artwork for an exhibition of his work called Funtastico at Israel's Design Museum Holon.

Called Face Mirror, the artwork comprised panels of Caesarstone cut and assembled into an abstract representation of the face of a monkey, with mirrors in the place of eyes.

"When we did that little mirror, an idea came to me," Hayon recalls. "It is quite amazing how they assemble this material together and create a new kind of marquetry. It's like 21st-century marquetry. How would you bring that to another level and create an architectural pavilion?"

Dezeen filmed this movie for Caesarstone at Palazzo Serbelloni in Milan. All photographs are by Tom Mannion. 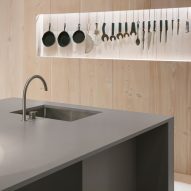