Autonomous vehicles will soon be tested and deployed on public roads in California without a human driver, allowing tech giants such as Uber and Apple to test prototypes on local roads for the first time.

California's Department of Motor Vehicles (DMV) announced the move yesterday, 26 February 2018, after lawmakers approved regulations that have been in development for three years.

The new rules allow vehicles to operate without a "natural person" on board, but still require a "remote operator" that can override via a wireless connection or communicate with any passengers.

This paves the way for cars without steering wheels, or acceleration and break pedals, to be deployed as soon as 2 April 2018 – providing their manufacturers can prove that they are safe.

Up until now, a human driver has been required to be present during test drives, to take over in case of a malfunction.

"This is a major step forward for autonomous technology in California," said California DMV director Jean Shiomoto in a statement. 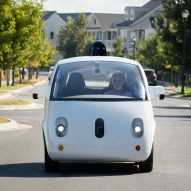 Waymo's self-driving cars could soften if they hit a pedestrian

Stipulations include the need for companies to provide details of how they would deal with law enforcement if a driverless car is pulled over. Data recorders similar to those used on airlines will also be required in each vehicle, to be retrieved in the event of an accident and used to help determine its cause.

The DMV is set to issue a notice outlining the details regulations on 2 March 2018, along with information about how to apply for permits – which the organisation says will take a month to process.

California joins Arizona, Michigan and Nevada on the list of states that allow fully driverless cars to be tested, but its inclusion is significant due to the volume of those currently developing and testing autonomous technology in the state.

Fifty companies including Apple, Uber and Alphabet are already testing driverless cars in and around Silicon Valley, where many of them are headquartered. Car brands like Ford, General Motors and Toyota are also using California as a test ground for their technologies.

Advances in autonomous vehicle design and technology are becoming ever more frequent. Recent announcements have included a patent filed by Alphabet's Waymo programme for cars that would soften on impact if they hit a pedestrian.