Fresh renderings of the Lucas Museum of Narrative Art by Beijing studio MAD have been released to coincide with the project's groundbreaking in Los Angeles.

Construction began this week on the museum that will be dedicated to the work of filmmaker and Star Wars creator George Lucas, following the project's own saga that has involved it moving across the country.

The new images show alterations to the roof of the curvaceous building, where visitors will be able to stroll around and get views across LA's Exposition Park.

Members of the public will also be able to wander along landscaped paths circling the structure, and walk through a giant arch that cuts through its middle.

The renderings offer a glimpse of the interior, which will include 100,000 square feet (9,000 square metres) of gallery space for displaying Lucas and wife Mellody Hobson's art collection, and memorabilia from his movies.

Transparent tube elevator shafts will transport visitors up through the swooping white ceiling in the cavernous lobby area. 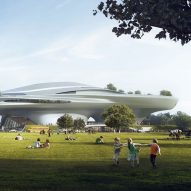 MAD's design also incorporates education and retail spaces inside the museum, which is expected to open in 2021.

The City of Los Angeles approved the museum in June 2017, after it was chosen as the location over San Francisco earlier the same year.

Lucas originally intended to build his venue in Chicago, and hired MAD for the project back in 2014, but faced legal issues over the proposed lakefront site.

Architect Frank Gehry voiced his support for the project, and MAD unveiled a slimmed-down version of the building in an attempt to appease critics.

The city council eventually gave the project the go-ahead, but then its mayor suggested moving it to another site after a judge upheld the block requested by local opposition groups.

In the end, Lucas decided to abandon Chicago for the West Coast, where the museum was received with open arms. LA mayor Eric Garcetti called it "a slam dunk" and "one of the boldest pieces of architecture we've seen in the world" when it received unanimous approval.