The American Institute of Architects has announced its top 11 residential projects for 2018, including a house in New York that takes design cues from its past as a Quaker settlement and a remote residence with expansive light wood and glass in rural Ontario.

The AIA 2018 Housing Awards recognises the most notable residential projects built in the past year. Winners of this year's award range from small homes to housing complexes and student halls, and were selected by a jury of industry leaders.

Among the 11 projects awarded is a monochrome apartment complex in LA with a stark white internal stairwell and courtyard, an expansive residence in the Arizona desert with patterned brick walls and outdoor areas, and a narrow three-storey house with a jagged roofline in New Orleans.

Read on for an overview of each project from the AIA:

Inspired by the history of the location, an early Quaker settlement, the design of this family home is based on the tenets of simplicity, humility, and inner focus. The house is broken into a series of modest gabled structures, each focused inward on its own garden courtyard instead of out to the surrounding neighbours. Every interior space is connected to the exterior on two sides. From selected vantage points, one may see across multiple spaces and courtyards to framed views beyond.

Each volume has a sculpted roof that funnels light and air into the centre of the structure. The detailing of materials articulates this organisation. Oak floor and ceiling boards radiate outwards from each centre courtyard. Metal straps on the ceiling further emphasise this geometry and act as a device to organise lighting and audiovisual equipment throughout the house. The Quaker values of simplicity and craft tie the new home to the community.

Located three hours northeast of Toronto, this 3,300-square-foot retreat is carefully situated along the shores of Contau Lake on a remote, seasonally isolated woodland spanning nearly 100 acres. Recalling childhood adventures exploring the surrounding lakes and forest, the clients wished to share this unique place with others by creating a place of reprieve to be rented to vacationing families.

The two-storey residence stretches parallel to the lake and a granite rock-face rising up to the south, with primary living and dining spaces at ground level spilling to the outdoors, and sleeping and bathing spaces perched above to capture expansive views of the lake and surrounding forest. The retreat serves as a jumping-off point to an expansive private trail network fashioned by the client. A series of delicate canoe docks and boardwalks knit shallow marshes with hilltop perches, urging exploration by both water and land.

The Ghost Wash House, located along the hillside of the north side of Camelback Mountain, is flanked by two washes that move stormwater down the mountain. Two tumbled brick bars run parallel to the east and west washes framing a third topographic condition, or "Ghost Wash," running down the centre of the site. The east bar contains the "support" programs of the house: garages, kitchen, family dining room, etc. The west bar shields the occupants from the intense setting sun.

As one of the densest neighbourhoods in the country, Los Angeles' Koreatown is at the forefront of changing modes of contemporary urban living. The design for Mariposa1038 plays with this burgeoning area's density with a pure cube extruded to fit tight on its lot, and then formed to gesture back to the public street and surrounding context.

To blur the distinction between public and private spheres, the design pushes the cube inward on each side, creating curves that grant relief from the sidewalk and return portions of the ground plane to the public realm. The carved opening creates a central focal point for the building’s interior organisation and lets natural light into the courtyard. The courtyard ribbon draws the eye upwards and creates continuity from floor to floor. All units have exterior access and can be cooled by cross ventilation. A rooftop deck provides additional outdoor space and skyline views.

The South 5th Residence slips nonchalantly into Austin's eclectic Bouldin neighbourhood and deftly negotiates Austin's zoning, envelope and critical-root-zone requirements. A rare, 25-inch Durand Oak and an unexpectedly steep escarpment created a powerful circumstance for a house that emphasises view and a dynamic spatial sequence, while at the same time being an abstract backdrop for the serendipity of light and circumstance.

The visitor arrives into a verdant courtyard under the majestic oak. A thin, four-inch gabion wall at the street, evergreen plantings and a perforated, Corten corrugated screen to the south, provide varying degrees of privacy and animation for the ensemble. A transparent living room hovers over the tumbling escarpment and reveals an expansive panorama. The visceral textures of concrete, mill-finished steel and raw stucco are presented against finely detailed millwork and custom site-glazed window walls – which are framed with rift-sawn white oak and steel to form flitch plate mullions.

This production house sets a new standard for the speculative tract housing industry. To the home buying audience, Residence G offers a production home that equals the presence of custom luxury estates. And Residence G does so at a record low construction cost – one-fourth the cost per square foot of the high-end residences seen throughout Southern California.

Clarity and precision, minimal lines, walls of glass, measured proportions, and cubist massing deliver iconic architecture that opposes the predictable Taco-Bell-style or the cliché mid-century modern tract homes prevalent in the area. In the past few years, Residence G and parallel other sustainable home designs by this architect have been built and sold, totalling over 200 completed homes in the Palm Springs area. Under the thesis of "Modern for the Masses", the architect's agenda has ignited an entirely new movement of design and demographics in the region.

The first test site for the Starter Home thesis, 3106 St Thomas is an undersized lot in the Irish Channel neighbourhood. Technically a historic district, the Irish Channel is in fact highly diverse in the character of its built environment, filled with low-density historic housing equally as regional industrial infrastructure. According to the Starter Home argument, the site is all at once a legal definition, an embedded history, a record of activity, and a physical entity.

A Starter Home expects no tabula rasa, and in fact relies on the specificities of site in order to function at its best, financially, urbanistically, and spatially. The overlay of zoning – both impediment and opportunity – guides the design process but also provides the potentiality of the site as Starter Home opportunity. With this in mind, no zoning variances were sought, and in its design, 3106 seeks to take advantage of its preconditions: adjacency to a warehouse and a two-family home, a highly restricted, long and narrow footprint, and a rather generous maximum height of 40 feet.

Bordering the West Village Historic District, 150 Charles Street overlooks the expanse of the Hudson River waterfront. On this exceptional site, we envisioned a building connected to nature and carefully integrated into its historical neighbourhood. To conserve the character of the street we preserved the original Whitehall Warehouse structure. Rising above is a contextual setback tower with a series of cascading garden terraces designed as a "fifth facade" to provide armatures for nature.

Highlighting natural materials of brick, wood and stone, the architectural expressions recall those of the surrounding West Village. The design proposal required the approval of several community boards and resulted in a zoning change that allows the new contextual massing scheme with the promise of "superior landscaping". More than half the site area is now covered by gardens, and each resident has direct access to nature through private or shared terraces and the lush central courtyard.

Each college has its own 300-seat dining hall and servery, a common room, a library, a faculty lounge, and provides access to shared lower level recreation spaces. Prospect Walk, a landscaped pedestrian way that bisects the site, provides east–west circulation and invites students and neighbours to pass between the colleges. Three new towers serve as vertical campus markers, giving the new colleges a presence on Yale's skyline and visually linking them to Harkness Tower at the center of campus.

A highly sustainable green landscape spreads across the entire site, while the building's arched form and open terraces float above. The reception lobby is positioned at the front to welcome residents and visitors and to create an active connection to the street. Inviting, light-filled spaces throughout the building form a network of healthy community spaces that connect residents. The four upper residential floors of studio apartments include large windows and are connected by open-air corridors that introduce vibrant colour, natural light, cross ventilation, and views of the surrounding city.

The neighbourhood-within-a-neighbourhood complex is composed of four multi-family residential buildings enrolled in various affordable and supportive housing programs, two rows of market-rate townhouses, community facility and retail space, and a central common green space. The interior lawn – the "green" of Navy Green – is open and directly accessible to every resident, an oasis in the park-starved neighbourhood that acts as a social aggregator. 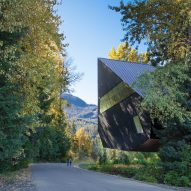