American firm Kieran Timberlake has used prefabricated components to create a mountaintop retreat, composed of a main dwelling wrapped in weathering steel and glass, and two micro cabins for guests.

The project, called High Horse Ranch, is located just outside the town of Willits, about three hours north of San Francisco. Situated on 64 wooded acres (26 hectares), the holiday retreat consists of a main house and a pair of small cabins for overnight visitors. It offers a completely different living experience for the owners, whose primary home is a renovated industrial space in San Francisco's Mission District.

"In contrast to their introverted loft, High Horse Ranch was designed to be outwardly focused and defined by the site, its views, and the natural landscape," said Kieran Timberlake, an architecture studio based in Philadelphia.

The scenic terrain features open meadows, evergreen shrubs and groves of oak, Douglas fir and ponderosa pine trees. To access the home, visitors must travel on a gravel road that winds up through the hills.

"The owners were struck by the dramatic experience of approach and arrival, where the edge of a cliff falls away and reveals a panoramic view of the forested valley below," the architects said.

"Accordingly, the design was driven by their early vision of the guest experience: a long, climbing drive; a short, shaded walk to a sheltered welcoming area; and then, upon entering the house and rounding a corner, taking in the view."

Early in the project, the placement of each building was carefully considered and adjusted several times in order to maximise views and reduce tree clearings. Oriented southwest to northeast, the main home sits between the two cabins. Each of the smaller buildings is about 150 feet (46 metres) away from the central dwelling.

Encompassing 2,580 square feet (240 square metres), the main home consists of two offset bars – one for public functions, the other for private rooms. The exterior is clad in perforated Corten screens and features a built-in nook for storing firewood. The building is sheltered by an overhanging roof, with soffits sheathed in wood. 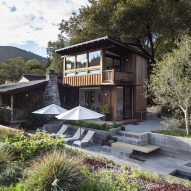 Serving as the "social centre of the house", the public zone contains an open-plan kitchen, dining area and living room. Large, glazed pivoting doors offer sweeping views of a verdant valley and enable the space to be fully open to the outdoors. The private pavilion contains a bedroom and a study, designed as a "refuge for reading and concentration".

The cabins – each 290 square feet (27 square metres) – sit atop concrete piers and utilise the same material palette as the main home. Each casita offers a different perspective, as one is oriented to the valley and the other looks toward a canyon. Both provide guests a high level of privacy and comfort.

"While they are dependent on the main house for meals and community, each cabin offers guests privacy and solitude with a bathroom, study desk, covered porch and fire pit," the studio said.

All three buildings were constructed using modular parts that were prefabricated offsite. The owners, who wanted to minimise the project's environmental impact, drew inspiration from one of Kieran Timberlake's earlier projects – the Loblolly House, a prefabricated home in Maryland that was completed in 2006.

"The owners favoured building techniques that would touch the site lightly and reduce construction waste," said the studio. "As a result, the design uses off-site modular construction throughout with varying degrees of fit-out."

The main house comprises two primary modules and 11 secondary modules, while each guest cabin is composed of a single module. Built in a factory, the modules were "carefully transported up winding roads and set in place without harming a single tree".

Kieran Timberlake was founded by architects Stephen Kieran and James Timberlake in 1984. Other projects by the firm include the Pound Ridge House in New York, which has a mirrored facade, and the US Embassy in London, which consists of a glass cube partially wrapped in ethylene tetrafluoroethylene (ETFE).