Dutch bike company VanMoof has launched a high-security electric bicycle that it claims is impossible to ride or sell if stolen.

The Electrified S2 and X2 model bicycles boast "stealth locking" that activates with a kick, rider-recognition technology that automatically unlocks the bike on approach and an alarm system that activates if tampering is detected. The security features negate the need for a traditional bike lock.

Should a thief break through these defences, the company's Bike Hunters – an opt-in service – get to work tracking down the stolen bicycle based on its location information.

"We can build bigger and tougher locks, or we can truly solve the problem by making our bikes pointless to steal in the first place," said VanMoof's Taco Carlier, who co-founded the company with his brother, Ties. "Using smart technology we've created a bike that can take perfect care of itself, leaving no more worries for the rider."

To lock the bike, the rider presses a button near the rear wheel, which they can do with a kick of their foot. This inserts a locking pin into the rear hub, making it impossible for a thief to ride off on the bike. Because of a Bluetooth connection with the rider's phone, the bike "wakes up" automatically upon their return.

"We believe bike theft is a much bigger problem than most people might realise," VanMoof co-founder Ties Carlier told Dezeen.

"Fear of bike theft prevents most of us from buying and riding a good-quality bike. What we've seen is that by removing that fear (as opposed to just making a bigger lock) and getting people on better bikes, they enjoy riding much more and therefore ride further and more often."

"This is even more relevant for electric bikes that are much more expensive but at the same time so necessary to cover longer commutes. Solving bike theft properly is therefore an essential element for a bike-friendly city."

Other new features include a Turbo Boost accelerator button, which VanMoof recommends for steep inclines or for setting off from traffic lights. The motor and battery are both concealed within the frame, part of one unit that is removable and replaceable. 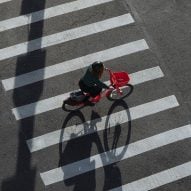 The Electrified S2 and X2 launched last week and broke sales records for the nine-year-old company, with 2,500 online orders in the first 24 hours.

They share most of their security features with the brand's Smart S and X bikes, released earlier this year, but with the addition of an electric motor that can provide pedalling assistance at a top range of 150 kilometres on a full charge.

The battery charges completely in four hours but can reach a 50 per cent charge in 80 minutes — what VanMoof dubs the "lunchtime topup". The battery capacity is 504 Watt-hours.

VanMoof's bikes target the city-commuter market, with an emphasis on design as well as security. Founded in 2009, the company makes bikes with a distinct look that highlights their tubular frames while concealing usually external elements like lights.

With its recent product launches, the company has further stripped its aesthetic down to just two colour choices: Fog White or Thunder Grey.

The Electrified bikes are unisex, but the X2 is recommended for riders 155 to 200 centimetres tall, and the S2 for those who are 170 to 210 centimetres. Both bikes have an aluminium frame and weigh 19 kilograms.

Ties Carlier told Dezeen that he wanted VanMoof's products to reach beyond the traditional cycling market.

"We always try to see car companies as our competitors, because inspiring someone to ditch their car in favour of a bike is the biggest win for everyone, including cities themselves," he told Dezeen.

"The traditional bike market is big enough and we don't want a piece of that — we simply want more people to use a bike for moving around cities, and we want to make the best possible bike for that purpose," he continued.

"We imagine a world 10 years from now where cars vanish from the centre of cities, and we think e-bikes can be a huge enabler of this. They allow people to cover much greater distances than before, saving time and money, and gaining fitness plus a cleaner city."

Other recent electric bike designs have come from Brompton, Noordung and even Norm Architects, while Uber has recently gotten into the game by acquiring the e-bike-sharing service Jump. 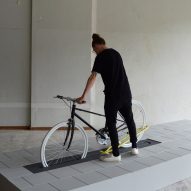