Designers Frederik Nystrup-Larsen and Oliver Sundquist have created a series of knobbly concrete vases that looks like lava rocks, for the new home of prolific Copenhagen restaurant Noma.

Nystrup-Larsen and Sundquist originally made two vases as Christmas presents for their mothers, shortly after graduating from the Royal Danish Academy of Fine Arts. They called them Mater, the Latin word for mother.

Shortly after, the vases were spotted on Instagram by Lea Kargaard of architecture and design office Studio David Thulstrup, which at that time was designing the new home for Noma, which is frequently named as one of the best restaurants in the world.

The studio commissioned the duo to create three more vases based on the two originals, to feature in the new restaurant interior.

The vases' textural forms are sculpted in solid pigmented cement. Each singular vase is made in a custom shape, so no two are the same.

While working on the new versions, Sundquist and Nystrup-Larsen discovered that they could further enhance the form by applying lacquer to the vases' inside while glazing the exterior with wax.

"The fact that they're made in cement means that the tactile element of the design is brought into play, while also giving the design an enhanced presence through its significant weight," explained the designers. 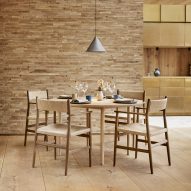 "Though taking the form of a vase, Mater tinkers with the conventional notion of its use by being created from the generic measurements of stools and side tables, allowing the user to simply flip the object and perceive it in a new context," they added.

Photography is by Simon Knudsen.