New York designers Agency-Agency and Chris Woebken have created a series of bright blue plumbing fixtures that could turn the city's fire hydrants into public drinking fountains or showers.

"Water Futures aims to inspire the creative community to take action in reimagining our toxic drinking water culture," according to the dedicated website.

"While New York City is one of only five major cities in the country with a high enough water quality that does not require filtration, this fact is often neglected in favour of purchasing filtered water in plastic bottles," said Agency-Agency, who teamed up with Woebken on the project.

The first in their set, Hydrants for All, aims to bring drinking water to city-dwellers, pets, and anyone else that may need it. Four shallow dishes at various heights would allow adults, children, dogs, and birds to drink the city water.

The lowest basin is a dog bowl, the middle two are outfitted as drinking fountains for humans, and the top vessel forms a bird bath. A vertical pipe connects these basins and ensures they stay full.

Next in the series, Hydrant on Tap is a refill station for reusable water bottles. A long handle controls the water flow, which comes out of a curved spout resembling a faucet. "[Hydrant on tap] references the idea of tap water, that could be accessible outdoors in public space," said Agency-Agency founder Tei Carpenter. 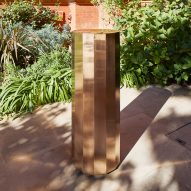 Finally, Hydration Space is a sprinkler that shoots water upwards, to cool the immediate surroundings and create a play area for children. Images of the installation show it spraying water in a large radius surrounding the hydrant.

All three of these interventions would feature shutoff valves, to avoid wasting water when not in use. These would also the users to control the water flow. "You can actually use the valve to control the water pressure as well depending on how you turn it," Carpenter said.

New Public Hydrant is on view at A/D/O until 15 November 2018, alongside proposals by Studio Swine and Ooze that also respond to the Water Futures brief. "The exhibition aims to reinvigorate the relationship urban residents have with water by weaving water more visibly and imaginatively into cities and our lives," said the A/D/O website.

Last summer, Brooklyn design incubator's courtyard hosted an installation by United Visual Artists made up of rotating mirrored columns that created a kaleidoscopic effect. The venue was previously activated with a pop-up factory by London-based collective Assemble, built from blue and white tiles fabricated on-site.

Photography is by Tei Carpenter and Chris Woebken. 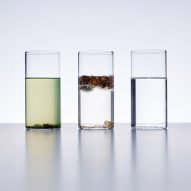