Design, Bitches co-founders Catherine Johnson and Rebecca Rudolph explain their idea to create a park that brings different activities together in unusual ways in our latest P.O.D.System Architecture movie.

The brief calls on architects to create conceptual buildings based on the story behind the sports brand's recently launched P.O.D.System shoe.

The shoe features a host of different shock-absorbing technologies developed by adidas in recent years, which Johnson and Rudolph say informed their design.

"In the development of the P.O.D.System shoe, adidas took their greatest hits from different shoes," Johnson explains in the movie, which Dezeen filmed in Los Angeles. 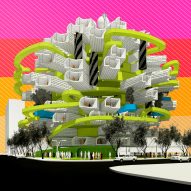 "These different technologies are being combined together to make something that is greater than the sum of its parts," adds Rudolph. "We came up with ideas for how architecture could work in this way."

Johnson describes Stomping Grounds as "a new kind of social space" that encourages people to "return to again and again".

The park comprises a series of architectural pavilions intended to host different activities, which Johnson and Rudolph combined in unusual ways to encourage people to use the spaces in new ways.

"For example, we combined a skateboarding ramp, a pool and a performance stage together – three elements that are not typically located next to one another," Rudolph explains. "They allow for spontaneous creation of new kinds of activities to happen."

Johnson adds: "There could be choreographed events of skateboarding and dance, or the Philharmonic could play while there is a swim choreography happening in the pool below."

The park also features a building comprising several rock-like structures with an elevated running track running around the outside.

"We are encouraging people to climb up and over the buildings as if they were natural terrain," Johnson says.

The rock-like building houses a brewery, and a pop-up beer garden that can be pulled out from the structure and unfolded when required.

"This park is a really flexible social space where collective creativity can happen and where architecture is supporting that," Rudolph says.

Stomping Grounds is the second P.O.D.System Architecture concept to be revealed. It follows a design for a spherical live-work complex by Neil Denari, which Dezeen published in a video last week.