The metal-clad inner and outer facades at this student housing project for the Olympe de Gouges University in Toulouse incorporate operable shutters that alter the appearance of the buildings.

The student residences were designed by a team comprising lead firm PPA Architectures, with support from Scalene Architectes and Almudever Fabrique d'Architecture.

The project is part of the regeneration of the university's Ponsan Bellevue campus and was initiated following a competition launched by the student housing association Crous in 2013.

The three local practices teamed up to secure the project, which involved delivering a total of 615 accommodation units distributed across two buildings.

A cluster of neglected apartment blocks was demolished to make way for the new campus, which was developed in consultation with student organisations in order to support both a sense of communal living and individual freedom.

"The project works at three scales: the campus, the buildings, and the lodging," the architects pointed out. "Its ambition is to create an active and welcoming place to live, where each resident can appropriate their own space."

Set at the foot of a hill, the cluster of new buildings is arranged around a central park that enhances the connection between the campus and the surrounding neighbourhood.

The area closest to the hill is occupied by a communal building that contains facilities including a laundry and a resources centre, alongside an outdoor sports pitch.

The two accommodation buildings are raised above the ground on concrete piloti to create a permeable space underneath that welcomes users into central garden courtyards.

The courtyards are surrounded by broad walkways that function as a vertical extension of the buildings, forming cloister-like spaces that provide access to and extend the areas dedicated to private accommodation.

Above the ground level, both the inner and outer surfaces of the buildings are punctuated by metal shutters with different finishes, ranging from matt to satin. 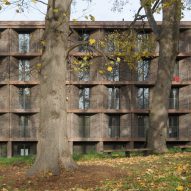 Students can keep the shutters closed for privacy or open them to the views of the campus or inner courtyard, resulting in facades that constantly change when viewed from outside.

"The dimensions [of the panels] lend rhythm to the entire project," the architects suggested, "changing the perception of scale and diluting the beehive effect that might otherwise arise in the repetitive stacking of 615 lodgings."

"Always changing, this outer skin reacts as much to the reflections of its surroundings as to the habits of its occupants," they added.

The structure of the residences is made from concrete, which is left raw and unfinished in the circulation areas. Plywood panels lining entrances to the rooms introduce a warm and natural detail.

The student rooms are designed as simple, standardised spaces that can be easily adapted by the occupant's needs by rearranging the furniture to suit the way they use the space.

In the UK a brick-clad student halls at the University of Roehampton, designed by by London-based Henley Halebrown has been shortlisted for this year's Stirling Prize alongside five other projects. These include the an extension to Tate St Ives by Jamie Fobert Architects, a cemetery with rammed-earth walls by Waugh Thistleton Architects and the London headquarters for Bloomberg by Foster + Partners.

Photography by Philippe Ruault unless stated.