3XN has revealed its design for the Sydney Fish Market, which will allow the public to observe the workings of what will be the world's largest wholesale fish market.

The new Sydney Fish Market, set on a 3.6 hectare site on Blackwattle Bay, will separate tourists from the industrial activities, but keep the seafood market visible. The existing market is held in warehouses on another site, where the large amounts of visitors are disrupting the proper functioning of the market.

The project is reportedly the largest investment in a New South Wales building since Jørn Utzon's Sydney Opera House.

The building will be covered by an undulating timber and aluminium roof. Its ground floor will have areas for fish to be loaded, space for the wholesale market, and an auction hall, surrounded by walls of glass.

The public will be able to access the first floor level from auditorium-style steps leading from a new plaza. Above this on the first floor a market-style arrangement of restaurants, cafes and retailers will be arranged around viewing galleries overlooking the fish market.

The large single roof made from timber and aluminium will rise and fall along with the building below. This roof is a major part of 3XN's plans for making the Sydney Fish Market sustainable. 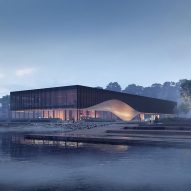 Triangular openings will allow sunlight to reach the interior, but will be angled to shade it from the heat of the day. The openings will also allow for natural ventilation, to try and keep air conditioning inside to a minimum.

The geometry of the prefabricated roof has been designed to help collect rainwater runoff, which will pour into a channel. When it rains, a waterfall will cascade down through the roof into a collection tank.

3XN plan for the fish market to use half the amount of energy and water consumed by the existing facility, as well as reducing the amount of waste produced by 50 per cent. A combination of rainwater harvesting, grey water recycling, and sterilisation systems will help save water during the fish market's daily wash down.

Planted areas filled with native species are planned to form a "green bridge" across the site, and the aim us for the new fish market  to recycle all of its food waste.

3XN has also designed a wave-shaped climate centre complete with rooftop wildlife pools for the waterfront of Lemvig, in Denmark. The Copenhagen-based studio is also planning an arena complex for the Norwegian coastal town of Bergen.