Network of Architecture has added seven new Alpine chalets in an expansion of the Zallinger resort in northern Italy.

The studio, also known as NOA built the chalets in a dramatic alpine meadow in South Tyrol.

Located on one of the main ski slopes of the Seiser Alm, the area was originally occupied in the mid-19th century by a hut, a cluster of seven barns that were later replaced by a single large building, and a church that remains intact.

NOA saw the project as an opportunity to "return to the roots of the place", said partner Andreas Profanter.

The architects extended the accommodation of the winter retreat with seven new chalets and a wellness area and also updated the original structure used by the hotel.

The architects felt it was important that the hotel's offering could be improved without disrupting the strong natural qualities of the site. The idea of a retreat but also of a refuge was considered throughout the project.

"The Zallinger is situated right at the borderline of accessible mountain pastures and very rough unaccessible terrain," Profanter told Dezeen.

"These extremes collide to make the Zallinger unique."

The layout, structure and appearance of the new buildings all take their lead from the site's history. The new chalets respect the original plan of barns on the site, while traditional South Tyrolean techniques were used, such as wooden shingles for the roofs. 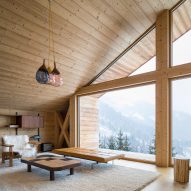 10 wintery chalets that offer sanctuary from the cold

The distinctive facades, built with stacked blocks of solid wood, are based on rural stadel, a type of barn. The rustic, timber-clad appearance of these structures "allows the inside to melt with the outside", said Profanter.

The new chalets buildings are arranged in pairs, providing four new rooms each, a total of 24 on the site. Each rests on a concrete plateau, and inside wood-lined walls are designed to bring a cosy "mountain-lodge" feel, with fittings inspired by a hunter's clothing.

The interior of the historic Zallinger hut at the centre of the complex has been completely reconfigured to provide a restaurant, lobby, lounge and restaurant, both for guests and for passing skiers, with a giant fir tree-trunk bar.

Wooden panels cover the walls and ceiling, behind which sit sound-absorbing panels to help dampen sound. This is also achieved by the use of felt flooring, a traditional Alpine material.

Sustainability was a strong driver for many elements of the design, not only in materials but also the size of spaces, intended to "provide high levels of comfort in relatively small spaces". NOA also decided not to illuminate the paths between each chalet to avoid light pollution.

Other projects completed by NOA for Alpine retreats in South Tyrol include a glass-bottomed, cantilevered swimming pool in the Dolomites.

Photography is by Alex Filz.