Created as a model for a tiny living space, the MINI Living Urban Cabin is a travelling installation designed to be adapted by different designers and architects around the world.

For the New York iteration of the cabin, which is currently installed in the courtyard at creative venue A/D/O in Brooklyn, MINI Living teamed up with local architecture studio Bureau V to add a kitchen and spiky yellow experience room to the compact 15-square-metre structure.

Bureau V co-founder Peter Zuspan says the playful additions to the cabin are designed to explore what the concept of home means for an immigrant.

"For us, New York City is the capital of the world in terms of immigration," he explains in the movie, which Dezeen filmed in New York.

"The story of the immigrant is really about finding new homes and really changing the way your life is going. In that sense we wanted to recontextualise what home means."

The dominant feature of the cabin is a bright-yellow snug – a small padded space to relax in – which is covered with spines on the outside.

Zuspan says this is a comment on how design can help make an outwardly harsh and uninviting city like New York become a welcoming place for new people. 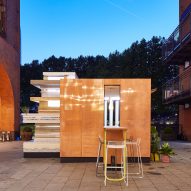 "We've created this very harsh exterior with these these spikes – something that could be considered dangerous," Zuspan explains.

"On the inside we've clad it with this bright yellow upholstered interior – an almost womb-like structure – in some small way thinking about how design can take danger out of things."

In contrast, the kitchen is covered in a soft inflatable material, which is light blue on the outside and silver underneath.

"With the kitchen, we took a couple of the standard design features that you see throughout New York – the galley kitchen as well as the shininess of the New York City diner – but we flipped it a bit," Zuspan says. "We took these harsh New York forms and made them soft and playful."

The MINI Living Urban Cabin in New York is the second iteration of the installation, following Sam Jacob Studio's customisation of the structure shown during London Design Festival.

As with the London installation, the New York cabin has been designed as a shared living space, with one end of the structure – featuring a hammock and shelves of plants – swinging open on large hinges.

"We created a winter garden where you can just relax inside," says Corinna Natter, experience designer at MINI Living who worked with Bureau V on the project.

"But you can also open it up to the public. So you can also sit there outside in the sun and share it with friends and family and just have a public and private area at the same time."

For Zuspan, the way the cabin opens up can also be read as a political statement.

"While we are debating in the larger scope about what American borders mean, I think that the home is a real landscape for those questions. And I think we need to start a conversation about new ideas of what that means."

This movie was filmed in New York by Dezeen for MINI Living as part of our Dezeen x MINI Living Initiative, a year-long project exploring how architecture and design can contribute to a brighter urban future, through a series of videos and talks.

Photography is courtesy of MINI Living.