Australian architect Glenn Murcutt has been appointed to design this year's MPavilion, an annual commission in Melbourne that follows the model of London's Serpentine Pavilion.

Murcutt, 82, will become the sixth designer of the temporary pavilion, which is installed every summer in Queen Victoria Gardens.

One of Australia's best-known architects and a Pritzker Prize winner, he is famed for projects including the Australian Islamic Centre in Melbourne, and the Arthur and Yvonne Boyd Education Centre in Illaroo. He has also produced a number of highly acclaimed private residences, including Donaldson House.

MPavilion is funded by the Naomi Milgrom Foundation, a charity led by businesswoman and philanthropist Naomi Milgrom.

Milgrom said she chose Sydney-based Murcutt because "he's been at the forefront of contemporary architecture for decades, with groundbreaking designs that are sensitive to landscape and cross-cultural collaboration".

"Quintessentially Australian and ahead of his time, Glenn's thoughtfulness about people, place making and the environment continues to inspire us all," she said.

The first MPavilion was created in 2014 by another Australian architect, Melbourne-based Sean Godsell. Since then it has been designed by British architect Amanda Levete, Indian office Studio Mumbai, Dutch firm OMA and Spanish architect Carme Pinós.

The Pinós-designed pavilion, which closed yesterday, hosted 133,000 visitors and 520 public events over its 139-day run.

"It's extraordinary what Naomi has achieved with MPavilion," said Murcutt.

"She's one of the great people in this country for supporting the arts, and more than just art but architecture, with a special understanding of city life," he continued. "MPavilion is an interesting and assiduous project, and I'm honoured to be commissioned." 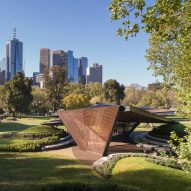 As with previous pavilions, both Pinós' and Murcutt's pavilions are expected to eventually find a permanent home in the city.

Godsell's is now located at the Hellenic Museum, Levete's can be found at Collins St in Docklands, Studio Mumbai's MPavilion 2016 has been installed in Melbourne Zoo, and OMA's is now at Monash University's Clayton campus.

The pavilion is scheduled to open to the public on 12 November 2019.