The pods that Spanish practice SelgasCano has built to form garden studios in Second Home's first US campus resemble a group of huge yellow lily pads from above.

The Second Home Hollywood campus comprises sixty curvilinear offices with yellow rooftops are built on the site of a former car park, alongside the former Anne Banning Community House, which was completed in the 1960s and renovated for the project.

Each of the garden offices varies in size and shape, with the largest accommodating 25 people. They are partially buried underground to improve their insulating qualities, while translucent acrylic wrapping around the top to allow for plenty of natural light, and offer views outside.

"It harks back to this idea we share with SelgasCanos that our best and most creative work comes from natural forms and organic forms, rather than overly contrived human geometry," he added.

Inside, the structure is bolstered by large steel beams that were incorporated due to the seismic forces of the site. They are painted yellow to match the colour of the rooftops and glossy epoxy flooring. Corian desks wrap the exterior of the offices to form individual work spots, and form larger meeting tables in the middle, while the chairs are covered in bold red and orange textiles.

Large wooden planters wrap the pods to host some of 6,500 plants and trees that were planted to green the site, and improve the experience of those working there "We're really interested in this idea of a new nature," Aldenton said. "We can play a role in enhancing ecosystems and environments."

"One way of doing that is to plant a heck of a lot of new plants," he added. "It's the densest new planting in California."

The plants were sourced from Southern California to include species that are suited to Los Angeles' drought conditions and low amounts of water. They will be watered with "smart controller" technology when necessary.

Wooden pathways lead in between each of these outdoor studios and surrounding trees to encourage interaction from different tenants, alongside outdoor patios with wooden decks for companies to socialise and host meetings – a key component of the Second Home philosophy.

SelgasCanos renovated Anne Banning Community House to include an additional 30 offices and studios on the upper levels, with the largest accommodating 50 people.

Large amounts of glazing with yellow frames are placed along the ground floor, where the building accommodates a host of spaces that are open to the public. These include a branch of the company's bookshop called Libreria, a restaurant, outdoor terraces and meeting rooms, which Second Home Hollywood will allow local charities and neighbourhood to use for free. 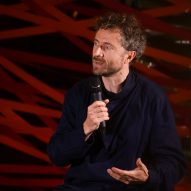 "We're not telling people what to do" says Thomas Heatherwick

There is also a 200-person auditorium which will be host its cultural programme spanning talks, screenings, food, music and performances. Other facilities include a recording studio to make podcasts.

Second Home Hollywood opened in September this year at 370 N St Andrews Place. It marks the sixth collaboration between the company and architects José Selgas and Lucía Cano, following others in east London, Lisbon and London's Holland Park.

Second Home bought and relocated SelgasCano's colourful Serpentine Pavilion to the city's La Brea Tar Pits. The rebuilt structure was used to host free public talks, film screenings, and other events from 28 June until 24 November to celebrate the opening of the Hollywood outpost.

As part of the series, Dezeen hosted a talk with British designer Thomas Heatherwick, in which he explained his studio's "human-centred" approach to the design of public spaces.