OMA New York is turning a historic post office in Houston, Texas into a complex featuring arts and music venues, workspaces and "one of the world's largest rooftop parks and farms".

Designed for private realty company Lovett Commercial, the transformation aims to preserve as much of the 550,000square-foot (51,096-square metre) building as possible, which was used by the US government from 1936 up until 2014.

"In a city that is constantly reinventing itself, it is incredible to have an opportunity to transform a building of such solidity and sheer scale," said OMA partner Jason Long in a project statement.

"Lovett's vision to preserve this structure from Houston's past allowed us to design a multi-layered, interconnected platform for the city's cultural and commercial future," he added.

A key feature is the overhaul of the building's rooftop into a garden and sustainable organic urban farm, called Skylawn. Billed as one of the "world's largest rooftop parks and farms", the five-acre (two-hectare) garden will provide 360-degree views of the city's downtown skyline.

Chicago landscape architect firm Hoerr Schaudt, which also designed the city's McGovern Centennial Park, will oversee the landscaping of the rooftop, which will include dining and event venues, and a stage for events.

There will also be allotments for growing food so the property's eateries can offer a rooftop-to-table experience.

It will become one of the "world's largest rooftop parks and farms", according to the firm, and will provide 360-degree views of the city's downtown skyline. 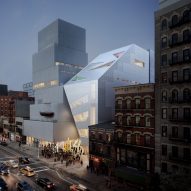 OMA's main intervention will be to break up the sprawling warehouse with four atriums, which the firm likes to huge rake markings in the building's structure. The atriums will form the central open area to the four different segments inside POST: culture, food, work and play.

The openings will be topped with transparent ETFE  – a kind of fluorine-based plastic – to bring in plenty of natural light. OMA has also created different staircase designs to lead up each opening and provide access to the rooftop park and farm.

POST, which is located in the historic Theatre District, will comprise a mix of open spaces and galleries for art installations, and venues for performing arts to connect with surrounding activities.

It will also include offices and flexible co-working spaces and a collaborative maker's space, which are designed to connect with Houston's future four-mile-long tech hub Innovation Corridor.

Eateries, coffee shops and retail spaces are among the other facilities.

The development of POST began in 2018 and is expected for completion in 2020.

Its other recent projects include the renovation of Sotheby's galleries in the city and a black Manhattan apartment building, which marks OMA's first ground-up structure in the city.

Renderings are by OMA and Luxigon.