AZL Architects has completed Song House, a concrete five-bedroom house adapted to the needs of its elderly and infirm occupants in the rural village of Nansong, China.

The three-storey countryside residence was designed to provide comfort and accessible living conditions for a couple in their 50s. It is also home to three older family members, a number of whom sometimes need to use wheelchairs. There are also guest rooms for the couple’s daughter and husband and their daughter.

The house was designed to be accessible and appropriate for all members of the family with an external wheelchair ramp giving access to the first floor bedrooms.

AZL Architects designed the house around an open-topped central space that alludes to those found in traditional farmhouses in villages.

"Rural settlements have been underestimated and neglected in its resourcefulness and values," explained Zhang Lei, who founded his studio in 2001.

"The natural humanistic values of rural settlements need to be reactivated through new production cycle and lifestyle."

A total of five bedrooms branch outwards from the central courtyard, which became the centre of activity in the house.

"The bedrooms form an interconnection of independence, privacy, and publicity, as well as a sense of ritual and a sense of belonging," said Lei.

The activity of the elderly mother was focused on the ground floor. Her bedroom is located adjacent to the living area, with small openings in the separating wall designed to increase interaction between the family members.

"The elderly mother can feel the ambiance of family activities inside her bedroom," said the studio.

The open kitchen and dining area plan was designed to accommodate the whole family's activities and interactions while doing housework and cooking.

The bathroom on the ground floor was built to fit two people, providing the space for assistance when necessary.

Three bedrooms on the first floor belong to the the couple, their daughter and her husband and the older couple who are his parents.

Outside the bedrooms, a small living area allows the couple to interact with their daughter's in-laws without the need to go to the main living room downstairs. 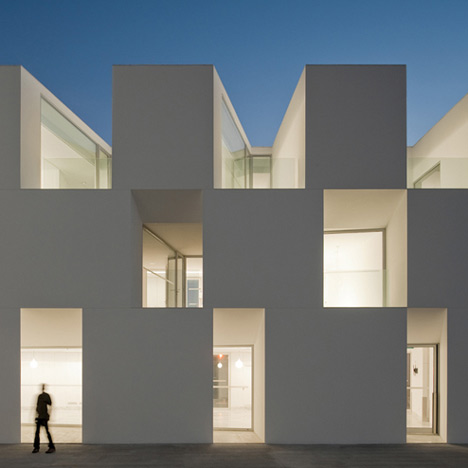 A ramp wrapped around the exterior of the north side of the house is used by the in-laws, whom are occasional wheelchair users. The pathway provides the opportunity to easily travel between the storeys and socialise with the neighbours.

With their bedroom located on the north side, the younger couple have a more independent space for when they are visiting.

The second floor is reserved for the granddaughter, consisting of her bedroom, a video room and table tennis room.

Mirrors at the ends of staircases and corridors were added by AZL Architects to visually connect all the public spaces of the house.

"No dead end exists in the public space, so that the elderly and the children can take care of each other," said the studio.

A small garden at the rear also has an additional kitchen, where the elderly mother is able to grow vegetables and plants.

"This house embodies the beautiful imagination and anticipation of a relaxed rural life for this family of eight," said the studio.

Multi-generational homes are becoming an increasingly-popular genre of house. Other examples in Asia include a three-generation apartment by Sosu Architects in South Korea, House for Four Generations by Tomomi Kito in Japan and ReGen House by EKAR in Bangkok, which also prepares for future family additions.

Photography is by Yao Li unless stated otherwise.

More designs for the elderly