Spanish designer Jaime Hayon has completed a fairground carousel covered with 15 million Swarovski crystals for the company's outdoor park in the Austrian countryside.

Called Carousel, the ride is a permanent installation at the Swarovski Kristallwelten, the crystal manufacturer's theme park in the Tirol mountains.

Situated amongst the park's topiary with the mountains rising up behind it, Carousel, is based upon the children's ride often found at a fairground.

It is designed to "reimagine the traditional carousel while retaining its nostalgic appeal".

Hayon has replaced the horses that riders traditionally sit on whilst the carousel spins, with a series of fantastical black and white characters. The designer looked to folklore and fairy tales to create them.

"The Carousel provokes feelings of freedom and joy – it is an art piece in movement and a place where imagination starts," said Hayon. "I'm excited for people to be transported into this fairy tale."

The undulating roof of the ride is adorned with black and white stripes, with an abstracted face and waving hands extruding from its top.

Beneath the roof structure, 15 million crystals are spread across the 12 ceiling panels, as well as appearing on 16 wall panels completed in thick black and white stripes that form the central column.

Mirrors are placed along the length of the column to reflect the many crystals, whilst a monochrome fence that features faces in outline runs around the perimeter of the ride. 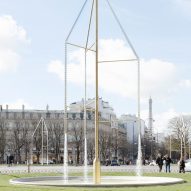 A further series of orange and white faces with the features picked out in graphic shapes punctuate the roof's rim. The poles that support the characters are decked out with stripes in the same shade.

"The carousel is a symbol of innocence and light-heartedness," said the curator of Swarovski Kristallwelten, Carla Rumler.

"But in this exciting new interpretation, the traditional connotation has been elevated and transformed into art. Jaime Hayon combines incredible elegance with his unique character figures, immersing riders in a crystalline moving fantasy world."

Opened in 1995 to commemorate the 100 year anniversary of the company, the park is a popular visitor attraction in the area, and is known for its Chambers of Wonder, a series of themed crystal-covered exhibition spaces.

The entrance is guarded by a foliage-covered giant whose open mouth resembles a waterfall.

Other designers and artists whose work features in the garden include Fredrikson Stallard and Cao Perrot whose work straddles the line between art and landscape.

Jaime Hayon recently designed Fritz Hansen's first store in China. Located in Xi'an, the sprawling 1,000 square-metre store is also the largest of the Danish furniture brand's many stores around the world.