Plates made from fish bones, potato peelings and oyster shells feature in the work of recent design graduate Carly Breame, who collaborated with a British seafood restaurant to make a "menu" of hyperlocal ceramics.

A graduate of Central Saint Martins' Material Futures masters programme, Breame wanted to support the future of the seaside town of Margate through localism, which encourages the local production and consumption of goods.

Her Off the Menu ceramics collection is made from food scraps from Angela's of Margate, and is intended to be used in that restaurant as well.

"As a maker, I develop functional ceramic works that centre around the dining table, acting as a representation of the local environment," Breame told Dezeen. "The ambition and motivation is often how to reconsider the materials we use and work towards circular economy goals."

Breame's crockery collection is designed to emulate a menu. The starter dish, Seafood and Wine, is made using oyster, mussel and scallop shells for the plate's body and crushed wine bottle glass for the glazing.

This is followed by the Fish and Chips main plate, made with fish bone ash for the clay body and potato peelings for the the glazing, and the Fruit Salad desert bowl, combining local clay with a glaze made from orange peel, banana peel and mint stalks.

There is also a cup glazed with a combination of coffee husks and charcoal ash, which Breame says represents coffee and cigarettes.

Breame's process involves kiln-firing the ingredients and then grounding them into a fine powder that can be used to replace part of the clay or glaze material. 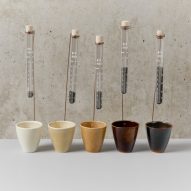 Smogware is a tableware collection glazed with air pollutants

For instance, the fish bones were boiled to remove excess flesh, then calcined in the kiln and ground using a pestle and mortar, while the potatoes were fired at a low temperature before being crushed into powder.

As well as being a maker, Breame is a researcher who has developed an extensive materials directory measuring the potential environmental benefits of replacing various components and energy systems with alternative resources.

To develop her ceramics, she considers waste streams and assesses whether they have the properties to replace part of the clay body or glaze.

"A single ceramic plate can have ten ingredients, all providing something different," said Breame. "So essentially, I am looking to replace each ingredient with a waste source."

"For the fishbone china, I replaced the bone ash with fish bones due to the properties being the same. Whereas the glaze, I managed to replace all the ingredients for the Seafood and Wine, as some of the ingredients covered two or more properties."

Even with her knowledge of ceramics and glaze recipes, Breame said that replacing ingredients is never simple.

"Testing the various temperatures and the unpredictability of ceramics meant opening the kilns was always a surprise," she said. "Nevertheless testing is also the most rewarding. Having success can bring pure joy."

Breame expects the plates to be used at Angela's and its sister eatery Dory's and hopes the project will serve as a manifesto for future restaurants interested in creating their own ceramics within a closed-loop system. To that end, she is considering sharing information as an alternative to scaling up production.

Other ceramics projects using food waste have included Zhekai Zhang's Coffire lampshades made using coffee grounds and Gregg Moore's crockery for the Blue Hill at Stone Barns made from the bones of cows used for the restaurant's meat and dairy.