A team led by Fernando Romero's Mexican studio FR-EE has won a competition to design a Hyperloop high-speed transport line, which will link urban areas from Mexico City to Guadalajara.

The Mexloop is set to become one of the world's first Hyperloop corridors, and will connect central Mexico's major metropolises to form a "megalopolis".

FR-EE – the firm led by architect Fernando Romero – was named the winner of the Hyperloop One Global Challenge with its proposal, and will now work with Hyperloop One to develop the network.

When completed, it will link the capital and most populous city, Mexico City, with the Bajío lowland cities of Queretaro, Leon and Guadalajara. They have a combined population of 42 million, expected to rise to 60 million by 2050.

Hyperloop was first envisioned by billionaire entrepreneur Elon Musk in 2014 as a high-speed transport system, which uses magnets and fans to propel passenger capsules through a network of pipes.

Travelling at speeds over 1,000 kilometres per hour (600 miles per hour), it would enable passengers to travel from Mexico City to Guadalajara in 45 minutes. Other lines are planned between Abu Dhabi and Dubai, a journey that would take 12 minutes, and to connect Bratislava, Vienna and Budapest in under 20 minutes.

The Hyperloop One Global Challenge attracted over 2,600 entries from around the world.

The strategy for Mexloop is help boost the already booming region's economic development, and grow its automobile, aeronautic, pharmaceutical, technology, and services industries. It is also hoped that it will reduce congestion in the capital and its surroundings, as well as create jobs.

"The proposal takes an approach to locating stations and leveraging development to further diversify and strengthen its array of manufacturing and technology industries, reinforce its network of top universities and research and development centres, and create radically new opportunities for people to live, work, and be anywhere, in minutes," said FR-EE in a statement.

For the competition, the consortium submitted plans for station locations and designs, route infrastructure, and pod design and logistics. The proposal is endorsed by the Mexico Construction Industry Chamber (CMIC) and is included in its Infrastructure 2030 Plan.

FR-EE is currently working on Mexico City's new international airport with Foster + Partners, and has completed major projects in the city like the Museo Soumaya. Romero also unveiled plans for a binational city spanning the US-Mexico border at last year's London Design Biennale. 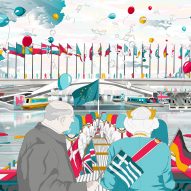