Rituals documents the 30-year-career of Donat, who got her start making lamps for friends and family and now creates tables, chairs, cabinets and shelving units.

"This exhibition will show the variation in her sculptural designs and the wide range of materials and techniques that are employed in her oeuvre," said Carpenters Workshop Gallery.

The exhibition's name comes from the artist's approach to her designs. "I envision my work as a ritual, a structured repetition in time and space from which an energy emanates," said described.

Among the exhibit is a series of bronze works that Donat created using a method called lost-wax casting. The process begins with a sheet of wax that the artists shapes and carves to create a mould for metal works. Molten metal is poured into the cast and left to cool.

Donat then engraves the bronze, paints the upholstery and treats the wood herself to match.

The artist's work features elements from her family’s roots in La Réunion, France. The intricate decorations etched into many of her pieces are reminiscent of tribal tattoos from the area, and scarification, a tradition that involves cutting and burning patterns into one's skin. 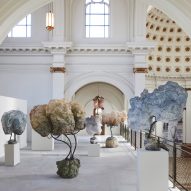 Donat works with a variety of materials that also emulate the textural designs of pieces by 1920s Art Deco designers Pierre Legrain and Aramnd-Albert Rateau. Like Rateau, who used animal, flora and fauna patterns in his pieces, Donat creates metal etchings that are evocative of fish scales.

"The motifs she engraves recall the animal and fish skins Art Deco artists incorporated into their works to add texture," the gallery added.

Other pieces in the Rituals show include an aluminium chair and matching ottoman, titled Fauteuil Ohio and Repose Pieds Ohio, and a variety of stands, coffee tables and buffet counters, which are all intricately carved with interlocking circles, loops and lines.

Rituals is on display in San Francisco’s Carpenters Workshop Gallery 18 September to 20 December.

Carpenters Workshop Gallery was founded in London in 2006 by Le Gaillard and Julien Lombrail in a former carpenter's workshop.

The San Francisco space, which opened inside a former church last year, forms its fourth outpost, following other locations in New York and Paris.

Recent exhibits at the international gallery have included a presentation of fashion designer Virgil Abloh's sinking furniture collection in Venice a series of lacquered tables and seats by Aldo Bakker in New York.

Photography is by Carpenters Workshop Gallery.