Chilean architect Alejandro Aravena, this year's Pritzker Prize winner, is releasing a number of his residential designs as an open-source resource to help tackle the global affordable housing crisis.

Aravena's firm, Elemental, has posted drawings for four of its low-cost "incremental" housing projects on its website for free download.

The aim is to provide the material to government agencies and developers who might think it's "too expensive" to invest in well-designed social housing.

Aravena announced the open-source initiative on Tuesday at a press conference at the United Nations headquarters in New York, after being awarded the Pritzker Prize for his innovative social housing work.

"We will put online, available as public knowledge, all the plans, all the files of the projects that we have done so far – the ones that we believe have been successful," he said. 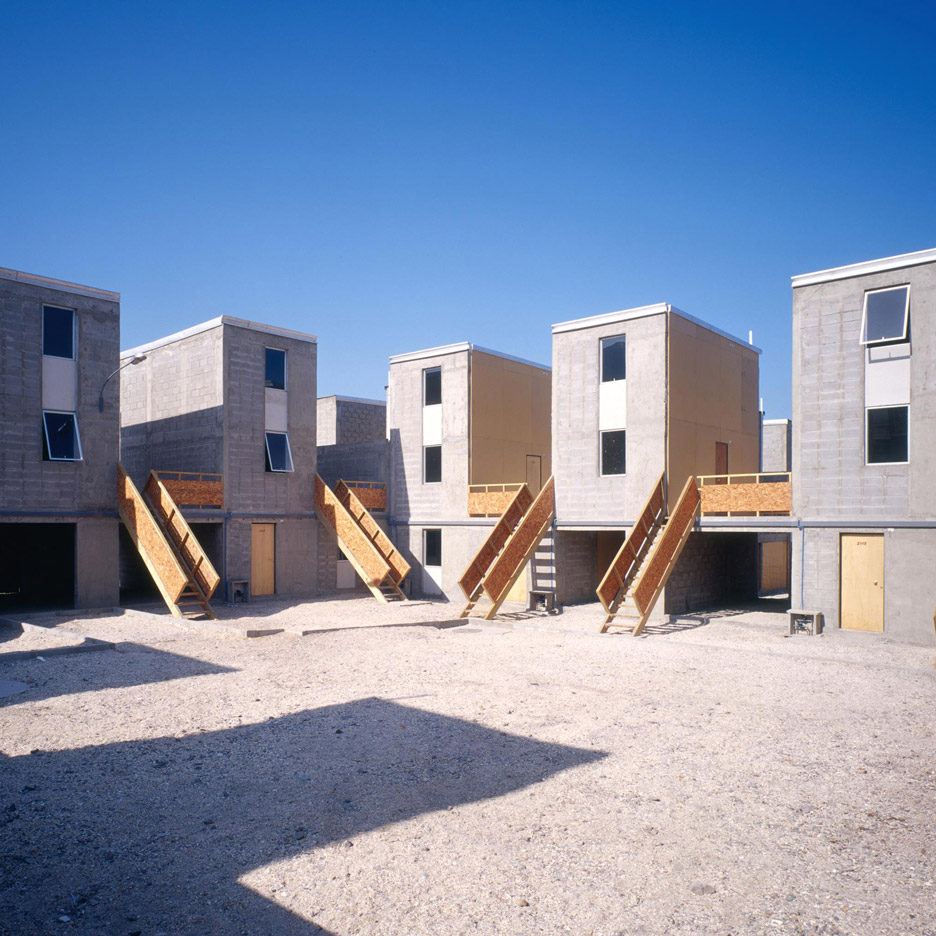 Aravena has championed an approach he describes as "incremental," in which governments fund construction of "half a good house," with residents completing the other portion as resources allow.

The projects he is releasing information for are three Chilean developments – Quinta Monroy, Lo Barnechea and Villa Verde, completed in 2013 and 2014 – and Monterrey in Mexico City, completed in 2010.

The architect said government agencies and developers are hesitant to spend money on forward-thinking designs, as they perceive them as high risk.

"Everybody is waiting for somebody else to move first," he said. "If you succeed, you get copied immediately and nobody wants to do that investment first. If you fail, then you have to alone swallow all your losses."

The need for social housing is becoming more pressing, with three billion people now living in cities and a third of them living below the poverty line, according to Aravena.

"We hope will be able to rule out one more excuse for why markets and governments don't move in this direction to tackle the challenge of massive rapid urbanisation," said Elemental.

"[The designs] are knowledge that we have tested, that have proved to be beneficial to communities and that have been implemented accepting very pressing budget and policy constraints."

The firm added that the designs might need to be modified to comply with local regulations and building codes, as well as "local realities" and availability of materials.

Aravena is the 41st recipient of the Pritzker Prize, the architecture profession's highest honor.

The 48-year-old architect is best known for his work with "do tank" Elemental, the architecture group that aims to alleviate poverty and eliminate slums using a participatory approach that engages local communities in early stages of the design process.

Elemental, of which Aravena is executive director, first attracted international attention in 2004 for the Quinta Monroy development in Iquique, Chile. The scheme was designed to make the most of a tiny budget by building the frame and the essential spaces for each house, leaving the remainder for residents to complete themselves over time.

The group also played a focal role in the rebuilding of Constitución, one of the towns that was almost destroyed by the 2010 Chilean earthquake and subsequent tsunami.

Aravena is curating this year's Venice Architecture Biennale, which is themed Reporting From the Front. It is intended to offer a new perspective on global issues including crime, sanitation, housing shortage, traffic, waste, migration and pollution.