The London-based designer created the N. 200 chair to mark the 200th anniversary of the opening of Michael Thonet's first joinery workshop in the German town of Boppard.

Gebrüder Thonet Vienna chose to work with Anastassiades as it admired his approach to designing objects that have a timeless appeal, resulting from their pared-back simplicity.

"They liked my general approach and philosophy and they gave me carte blanche to do what I wanted," said the designer, who is best known for his lighting designs such as the minimal String Lights he developed for Italian brand Flos.

"I wanted to do a chair and I liked the idea of a low-slung side chair that's comfortable and lightweight, so I went to them with that proposal," he added.

After visiting the company's production facility, Anastassiades witnessed how similar the current manufacturing process is to the way the company has traditionally produced its furniture.

"I found it really challenging to come up with a language that is saying something different but at the same time very much respecting the history of the brand," the designer told Dezeen.

The N. 200 chair maintains the aesthetic language of the brand's other designs, with the fluid lines of the frame expressing the manufacturing method.

A curved rear-support is fixed to the front leg and merges with a single looped form that encloses the woven-cane seat and backrest. 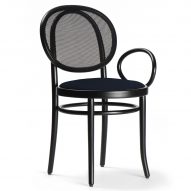 "In most of Thonet's chairs you have an elaborate bentwood frame and the seat itself is a separate component," Anastassiades pointed out.

"I wanted to incorporate the seat as part of the bentwood technique," he added. "It looks like a doodle or a drawing done with a single line, with the surface of the seat incorporated into the frame."

In addition to a timeless aesthetic, Anastassiades said the main objectives included "comfort, tactility and lightness so the chair can be easily moved around".

The N. 200 chair is shortlisted in the seating category of the Dezeen Awards 2019, alongside a high-quality flat-pack chair designed by London studio PearsonLloyd, and a chair with integrated storage by Industrial Facility.

Anastassiades joins a roster of contemporary designers who have created new products for Gebrüder Thonet Vienna. Swedish studio Front has designed several products using the company's bentwood processes, including a minimalist rocking horse and a one-armed version of the classic N. 14 chair. 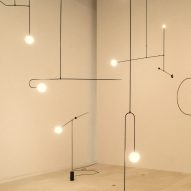 Michael Anastassiades presents his sculptural lighting in retrospective at NiMAC

The designer, who founded his eponymous studio in 1994, developed his first mass-produced furniture collection for US company Herman Miller in 2016.

The series of sculptural stools and tables were presented in an installation based on a painting by metaphysical artist Giorgio de Chirico.

Anastassiades has also designed a two-seat sofa for London design brand SCP, but has spent most of the past decade designing statement lighting products.

Many of his most iconic pieces featured in a retrospective exhibition held earlier this year at a gallery in his native Cyprus.