The watchmaker's campus centres on a 240-metre-long timber vault – one of the largest wooden structures in Europe, claims the practice.

The timber gridshell – a double-curved gridded structure  – contains the Swatch Headquarters, snaking across the street to connect to a five-storey building.

This ancillary structure, also by Shiguru Ban, houses the Omega Factory and the Cité du Temps, a group of 18 watch brands.

The 7,700 timber pieces forming the gridshell roof of the Swatch building were engineered with a precision of 0.1 millimetres.

The architecture studio said the design is "playful, innovative and provocative" and demonstrates the capabilities of timber construction at a large scale.

Inside, a triple-height atrium leads to three storeys of office space sitting within this wooden shell.

The timber superstructure has been left exposed where it meets the edge of each floor plate and on the ceiling of the upper level.

A total of 2,800 facade elements in three varieties – opaque, transparent and translucent – cover the timber structure, controlling light levels and privacy throughout the interior.

The second building is made with a wooden frame with cross-laminated timber floors, and is raised above the ground on a colonnade that blends into the lower level.

Timber beams and columns of the structure have been left exposed, wrapped by glass walls that give views out to the town below. 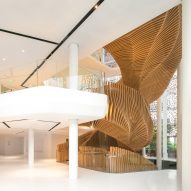 At its upper level, a gondola-like protrusion from this building connects with the wooden shell of the Swatch headquarters, covering a glass bridge that leads through to a 400-seat elliptical conference hall.

At the rear of the Omega Factory a large metal spiral staircase flanked by two metal cones alludes to the watchmaking tools used within.

The entire campus is accompanied by an extensive masterplan, which has slowed traffic in the area and planted over 120 new trees.

Japanese architect and Pritzker prize-winner Shigeru Ban's projects seek to demonstrate the potential of wood as a construction material due to its environmentally friendly properties.

Earlier this year, the practice completed a timber-framed boutique hotel in Japan, and in 2017 unveiled what is set to become the world's tallest hybrid timber tower in Vancouver, Canada.