Bear-shaped armchairs and cushions embroidered with red lips are among French designer Pierre Yovanovitch's latest collection of furnishings, which are on display at New York gallery R & Company.

Yovanovitch has transformed the R & Company gallery space into several domestic scenes to display the collection titled Love. He has decorate the interior to bring life to the imaginary character Miss Oops, who regularly appears in his designs.

"The exhibition will lead guests through an unfolding narrative centred around an imaginary recurring character in the designer's work called Miss Oops," R & Company said.

"Visitors encounter different domestic scenes symbolising the emotional evolution of the Miss Oops' budding romance: starting in the parlour, leading to the dining room, then the boudoir, and ending in the bedroom."

Miss Oops first appeared in Yovanovitch's work at the Design Parade Toulon festival in France in 2018, marking the beginning of the designer's exploration with "scenography".

"To bring my work out of the context of a private home and into a scenography of my creation is so special, as it not only allows me to dabble in my passion for set design and narrative and showcase my designs to the greater public, which is something I rarely have the privilege to do," Yovanovitch said. 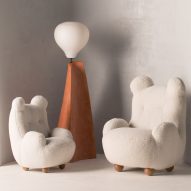 Additional whimsical graphic elements, deep-coloured walls and soft lighting are paired with the pieces to further explore the exhibition's theme of love.

Two ear-like nubs top the Daydream Mama and Papa Bear armchairs placed in the space's parlour room, which features dark blue walls and a neon sign. The cosy chairs are also decorated with embroidered hands and arms that were woven onto the custom upholstered pieces to give the allusion that it is being hugged.

Placed within the exhibition's dining room is the large pentagonal Match table with dark blue patinated steel legs. Surrounding the table are Yovanovitch's Madame and Monsieur Oops chairs, defined by their almost identical shapes. The Madame design features a heart-shaped upholstered back, while the cushioning on its masculine counterpart inverts that design.

Other pieces in the collection include Take Off, a rounded bed frame made from oak, Frolocking rug, which weaves together wool, mohair and silk and several cushions, and bedspreads detailed with lips and other lust-influenced symbols.

The Love series and accompanying exhibition will be on display at the R & Company White Street gallery 6 November 2019 to 4 January 2020.

R & Company is a New York based design exhibition space founded by Zesty Meyers and Evan Snyderman. Other designers that have displayed work in the gallery include Sebastian Errazuriz who created a chandelier using 100 stuffed birds and Bae Se Hwa with his series of curvaceous dark wood benches and lounge chairs.

Yovanovitch founded his Paris studio in 2001. His previous projects include other fuzzy bear-shaped armchairs, a boldly painted gift shop in Paris, and a London restaurant with salmon pink walls and a cooking-themed mural.

​Photography is by Stephen Kent Johnson.