The Elbow Pipe was created in collaboration with Tetra, a marijuana accessories company located in New York and Los Angeles, and Portland cannabis lifestyle brand Serra.

Originally the ceramicist moulded the design for the Elbow Pipe out of clay, a medium frequently used in their other pieces. But Tetra suggested using transparent glass instead, so users could watch the smoke move through the winding shape.

"Choplin originally conceived the design of the Elbow in clay, but was invited by Tetra to translate it into transparent glass, allowing the user to watch as smoke billows through its curved interior with every puff," said Tetra.

"Its form was inspired by the elaborate tubular water slides common to water parks in the 1980s and '90s," the company added.

The design consists of a single glass volume made from borosilicate, a glass fabricated through the mixing of silica and boric oxide. It is offered in two transparent colours, dark blue and light pink. Choplin designed the pipe so that it could also function as an object to display in one's home.

"I was interested in the shapes and colours, but also in comparing the movement of water to the fluidity of smoke," Choplin said.

"As usual for my designs, I was also looking at making an object that we've mostly seen in conventional shapes into something more playful and sticking," the designer added. "An object that you can use but also display and highlight in your home."

It features an upright mouthpiece that curves downwards to form the pipe's body, similar to an elbow joint. The tubular stem is evocative of water slides. A small hole, known as a carb, punctures the end of the curved pipe.

Ninon Choplin founded Neenineen, a Los Angeles ceramics studio that hand makes pipes, as well as other objects including painted bowls and mugs.

Elbow Pipe is available for sale on Tetra's website and will also be a part of a special collection of objects to celebrate the opening of Serra's first California storefront early next year. It will be sold in a special Tetra x Serra collaborative box.

Tetra is an online shop dedicated to smoking accessory design, with other products including a patinated brass lighting case.  Products for sale are lighters, ashtrays and incense burners. It was founded by journalists Monica Khemsurov, Su Wu and Eviana Hartman. Khemsurov is co-founder of online magazine Sight Unseen, while Wu set up creative blog I'm Revolting. Hartman is a writer and stylist for publications like Vogue and T Magazine.

Serra currently has two stores in Portland, Oregon, its downtown location, designed by OMFGCo and JHL Design, displays its products in tiny greenhouses. 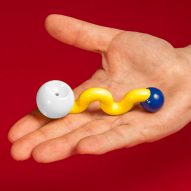 The legalisation of marijuana in states across the United States has prompted many designers and artists to create cannabis related products. Nikolas Bentel's The Wiggle Pipe, decked out in Memphis style colours, also features a curved body and college student John Quick made ceramic donut shaped pipes.

Photography is by Corey Reeb, unless stated otherwise.