ÉCAL graduate Tuo Lei has created a fashion collection from abandoned festival tents, based on simplified patterns that can be replicated at home with just basic sewing skills and the accompanying instructions.

The P+365 project turns the tents collected from a given festival into a series of raincoats, caps, bags and bucket hats, with the aim of selling them at the same event the following year.

Alongside this, an illustrated, step-by-step manual complete with sewing patterns also allows people to take matters into their own hands.

"I've always been attracted to the details and materials of camping equipment," Lei told Dezeen.

"So I saw the potential to turn these discarded tents into garments that have the functional benefit of being waterproof while still being fashionable."

Beyond raising awareness of the issue of waste, the collection also gives revellers a more meaningful alternative to regular merchandise to take home with them.

"The tag on all P+365 products says the name of the festival it was collected from and contains information about the idea behind the collection," explained the designer.

"This makes it a sort of collectable memento. The item directly reminds the user of its backstory while also giving the people who created the problem a way to invest in its solution."

The leftover tents themselves are sourced from local environmental charities which collect them once the camping sites have been abandoned. From there, they are taken apart and sorted into their constituent materials. 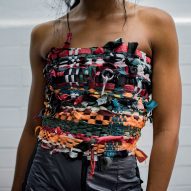 "There are three material groups in one tent: the main upper part, the sheet at the bottom and the other elements such as hooks, loops and zippers that can be used for the caps and bags," the designer explained.

"All the material selections and where to apply them are also broken down in the DIY manual."

The colourful upper is used for all the products, with the poncho needing the majority of the fabric and the offcuts used to make the other items. The sturdy flooring meanwhile is used only for the bags.

At the moment, Lei is in the process of contacting different music festivals in the hopes of partnering with them next year.

Elsewhere, Chloe Baines has created a womenswear collection from upcycled tents, while Belle Smith made matching jewellery from the pegs.

Other designs from ÉCAL graduates include sustainable, seaweed-fibre nappies and a modernist, electric take on the prayer candle.