Led by design director Bonanni, Milanese brand WEED'D created the collection of bongs to challenge traditional associations of weed smoking. Bonanni designed one of the bongs himself with Sommella and Casadei contributing one each.

The products have been launched ahead of 420 – a day that marks the celebration of cannabis consumption globally, tomorrow.

Crafted from ceramic, the trio of boldly-coloured bongs will be available in shades of brick yellow, deep blue and pale beige, designed in shapes with soft and rounded angles.

Bonanni created a tall geometric bong, while Casadei's design has a rounded base and Sommella's bong is V-shaped.

The products are named SB001, VS001 and MC001 respectively, after their designers' initials.

"The [designs] stand in the middle between performing products and home decor objects," said WEED'D founder Stefano Aschieri, who recruited Bonanni as design director on the project.

Bonanni explained that the bongs aim to confront traditionally negative health and lifestyle narratives associated with marijuana, and instead offer users art-like objects that double as smoking devices.

"Performance and functionality are respected and fully guaranteed with our products as we understand the ritual has enormous importance for the traditional cannabis user, yet this is not our main focus," Bonanni told Dezeen.

"We as designers would rather challenge the typical product architecture of smoking objects and their meaning in our everyday life to envision new aesthetics and values." 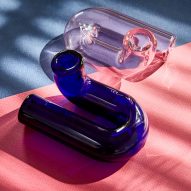 Bonanni and Aschieri also added that the WEED'D bongs are designed to be modern and fresh in a way that distances them from more clinically-shaped, typical smoking objects.

"Today, the question is, what would a smoking object look like nowadays?" said Bonanni. "How would it look when you don’t use it? What does your bong mean to you?"

"These are bongs that can't be hidden when mum comes home," joked Ashieri, acknowledging their bright and bold design.

WEED'D is a spin-off of Ashieri's company WOOD'D, which sells various accessories. The bongs will be available at a launch event in Milan on 20 April, as well as online and at selected retailers in Italy, Switzerland and France.

As cannabis continues to become legalised in countries around the world, designers and architects are creating products and experiences to reflect this.

The photography is courtesy of WEED'D unless otherwise stated.