In this movie, we look back at this year's Samsung Mobile Design Competition, a collaboration between Samsung and Dezeen, which challenged designers to come up with innovative new mobile accessory and wallpaper designs for Galaxy devices.

Launched in June 2019, the Samsung Mobile Design Competition was a global contest that sought ideas for how Galaxy mobile devices – including smartphones, tablets and wearables – could be used in future.

"Whether it's through product design or user-experience design, we're constantly exploring ways to take users' experiences with our Galaxy devices to the next level and to shape the next wave of Galaxy experiences," said Samsung.

There were two categories to enter in the competition. The Next Mobile + category was to design mobile accessories that created new ways to experience Galaxy devices. The Next Mobile Wallpaper Paradigm category looked for new wallpaper designs that went beyond simply being an attractive image.

Five finalists in each category were selected to travel to London to present their designs in front of a jury featuring designers Stefan Scholten and Paul Austin, executives from Samsung's IT and mobile communications division, and Dezeen editor-at-large Amy Frearson.

The jury selected the top three winners in each category, who travelled to the Samsung Developer Conference in San Jose, California, in October 2019.

Each of the designers had the opportunity to present their concepts to visitors at the conference, an annual event that provides exclusive access to Samsung's latest ideas, spanning mobile devices and smart technologies.

Designers from Germany, Portugal, Turkey and the UK were selected to present their concepts to the jury in the mobile accessory design category.

They presented a wide variety of different designs, ranging from a simple belt to prevent users from dropping their device to a concept that transformed a Galaxy smartwatch into an interactive children's toy.

The judges selected Alexander Rehn and Tobias Saller's Belt of Galaxy, Ece and Cagatay Demirpence's Fellas of Galaxy, and André Gouveia, Nuno Pires and João Pereira's Star of Galaxy as the top three designs in the mobile accessories category. 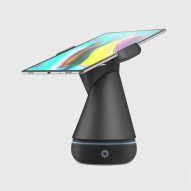 Star of Galaxy claimed top prize in this category, which was announced at the Samsung Developer Conference on 29 October.

The concept is a robotic stand that turns a Samsung Galaxy device into a collaborative smart assistant, which can follow a user around a space by automatically adjusting the position of the device depending on where they are located.

Jury member Paul Austin described the design as "a really interesting solution because it added to the possibilities of what a mobile accessory could mean."

Many of the designers incorporated elements of nature and colour into their wallpaper designs, which ranged from simple graphic designs to interactive concepts.

Garden of Galaxy was selected as the winner in that category, which was also announced at the Samsung Developer Conference in San Jose. 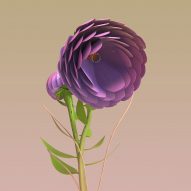 The concept is an algorithmically generated design, which would give every Samsung Galaxy user the chance to grow a virtual flower, unique to their device, on their screen.

"It's a very complex idea, executed with simplicity and grace," Austin said of the winning design.

"The contest attracted a lot of young millennial designers and creators from a wide range of backgrounds," said Samsung

"Through this competition, Samsung also sought to learn how to communicate with the world and to gain an insight into how our product is perceived, which was very important for us as well."

The Samsung Mobile Design Competition was a collaboration between Samsung and Dezeen. The video was filmed by Dezeen for Samsung in London and San Jose.