A cantilevered upper floor and a glazed gable end feature in a house in Berkshire, England, by architecture practice Spratley & Partners.

The rural house is covered in pre-weathered burnt timber and brick, topped by a steep pitched zinc roof.

Called Field House, the project is and located in the large grounds of an existing property.

Spratley & Partners were able to achieve planning on this green belt site by originally proposing a small end-of-garden outbuilding, or shed.

With this approved, the project grew after further applications were submitted for a basement and first floor.

Extensions were then allowed through permitted development.

By drawing on the appearance of the agricultural sheds nearby, Spratley & Partners were able to keep the visual impact of Field House to a minimum even as its volume grew.

"The entire village and planners tried to resist this new house as it was contrary to policy and could set a precedent," director Jeremy Spratley told Dezeen.

"However, we managed to persuade the planning committee on the night of their meeting to agree that it was a sensitive building and that the physical presence of this house was not more impactful than the consents we had achieved for the garden building."

At ground floor level the living, dining and kitchen area, a snug and a boot room are arranged around a central wooden stair, along with a small entry hall and bathrooms.

All this sits within the footprint of the outbuilding that was originally proposed for the site.

With the plan being relatively tight, these rooms lead directly into one another through sliding doors.

The double-height living area ends in a glazed gable-end with views out across the garden and the Thames valley beyond.

Doors open onto a paved terrace that leads to a winding garden path.

Below, the basement houses a cinema room, plant room and store.

This underground level is illuminated by a thin lightwell topped by walk-on glass on the terrace above. 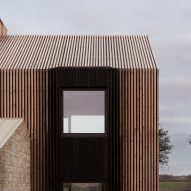 Each bedroom is oriented to look out at a different aspect of the garden surrounding the home.

The landscaping of this extensive garden was designed by Andy Sturgeon.

It is split into three distinctive areas, comprising a wildflower garden, a formal lawn and a south-facing gravel garden.

In the western bathroom, a small window overlooks the double-height living room.

The eastern bedroom looks out towards the gravel garden as it wraps around the side of the home.

White wooden panelling lines the roof of the kitchen and dining area, wrapping around to cover the upper storey bathroom.

Many architects working in rural contexts turn to agricultural buildings for inspiration.

In Australia, Lovell Burton drew on the surrounding hay sheds in its designs for a new house, and in Yorkshire Tonkin Liu repurposed an old barn to create a home around a large library space.

Photography is by Andrew Beasley unless otherwise stated.