Slovenian practice Arhitektura d.o.o has designed a low concrete house in the suburbs of Ljubljana around a central courtyard that connects a series of living spaces with the owner's ceramics studio.

Called House for a Ceramic Designer, the home faces its surroundings with an austere and smooth concrete finish, but opens up internally with full-height glazing overlooking a paved patio and small garden.

"The atrium was designed to unite the family's living quarters and the working studio of its owner under one roof," explained Arhitektura d.o.o.

"[The house] is closed from its visually busy immediate surroundings, which will undergo unpredictable development in the future, while at the same time providing a well-lit and fully connected living and working space."

The U-shaped plan of the home is organised into three areas: the ceramic studio to the north, a large living space in the centre and a bedroom block to the south.

In addition to its solid concrete walls, the home is further shielded from overlooking by a low concrete wall that wraps around the site boundary, enclosing a thin strip of grass that runs alongside the central courtyard.

"The inner spaces of the house open via large panoramic windows onto the central atrium, which is designed as the in-between space," described the studio. 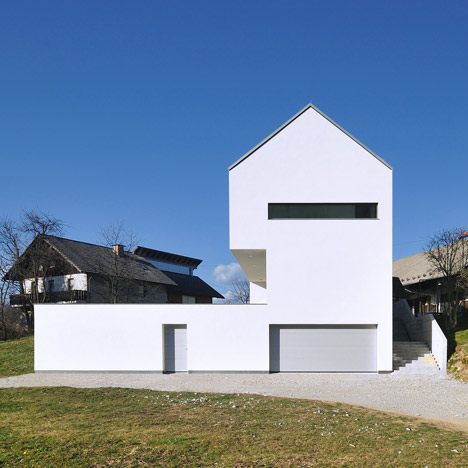 "It allows passage to different parts of the house and direct communication between the workshop and the living quarters, the glass delineating the interior from the outside as a thin invisible membrane."

A cut in the northeastern corner of the home, sheltered by a projecting section of the roof and lined in contrasting wooden panelling, provides a parking space and a separate entrance directly into the ceramic studio.

The interiors mirror the visual simplicity of the exterior, with white walls and pale wooden floors and fittings.

In the studio, a steel shelving unit creates an exhibition-like display of ceramic works visible from the courtyard and bedrooms beyond.

"The building and its interior are dominated by a neutral colour palette," said the studio.

"The tectonic exterior with its silky-smooth concrete facade and light terazzo floors gives the impression of a sculptural pieces, whereas the warm and intimate feeling of the wood-clad projecting roof hints at a different atmosphere inside."

When the owners wish to separate home from work, a series of white curtains can be drawn to provide spaces with privacy from the courtyard, and the sliding door to the ceramic studio shut to isolate it from the living room.

Other projects by Arhitektura d.o.o include the refurbishment of a tower-block apartment by Modernist architect Edvard Ravnikar, and a minimalist footbridge across the Ljubljanica River in Slovenia's capital.