Sushi wrapped in shopping bags and beer frothing with styrofoam bubbles are among the unappetising images in Sweet Sneak Studio's Microplastic Photo Series that explore the impacts of plastic pollution.

The Dutch food design studio teamed up with photographer Morten Bentzon for the series, which features eight different foods that tend to contain microplastics — the sub-five-millimetre pieces that remain after plastic waste degrades.

Sweet Sneak Studio undertook the project to raise awareness of the ways that commonly used plastics such as grocery bags and cling wrap re-enter the food chain. They also wanted to bust the myth that seafood is the only culprit.

"Because of their tiny size, [microplastics] can escape water treatment filtration systems and spread out in our oceans or in other water bodies," said the studio. "A range of sea life including zooplankton, octopus, clams, oysters, fish and seabirds can ingest microplastics, which may result in health impacts."

"Eventually, microplastics move all the way up to the top of the food chain and end up on our plates," they said.

"Even water is affected when bought in returnable plastic bottles as the bottles have the highest content of microplastic. Scientists have also found microplastics in beer, honey and sea salt."

Accordingly, each of their photos showcases one of these foods, always centred in the frame and portrayed against a brightly coloured, flat background.

The sushi roll photo replaces the usual seaweed wrap with blue and grey plastic grocery bags, while the image of a glass of beer has styrofoam beads in place of its frothy head. 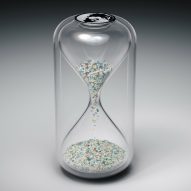 Another photo shows oyster shells filled with scrunched cling wrap, while a tin with the lid peeled back reveals a coffee cup lid and other plastic scraps where you would expect to see sardines.

A pot of honey is strewn, snow globe style, with confetti-like plastic pieces, and a water bottle contains more plastic inside than out.

In the most minimal image, what appears to be a mound of salt is, on closer inspection, a pile of white plastic shavings.

Sweet Sneak Studio usually produces content and events that focus on the beauty of gastronomy, but co-founder Katrin Fiesler told Dezeen that the group were increasingly focusing on the "ugly truth" of the industry's issues around food waste, unsustainable packaging and unethical sourcing.

They created the series for Copenhagen Zoo, which exhibited the works on site in 2019.

Another designer to recently highlight the problem of microplastic pollution is Brodie Neill. In a project called The Capsule, he filled an hourglass with plastic pieces he collected from beaches in Tasmania where he grew up.