The site of BIG's proposed new national theatre in Tirana has become the focus of anti-government protests as demolition of the original theatre begins.

Protesters chanted "shame" and "dictatorship" as mechanical diggers were used to knock down the Teatri Kombëtar building, which dates from 1939, reported Reuters.

Up to 37 people have been arrested at the site including member of parliament Monika Kryemadhi, who is married to the president of Albania.

Political activists and artists have been campaigning to save the 1930s theatre as an architecturally significant and historically important building for the Albanian capital.

Albania's prime minister Edi Rama, who has been in power since 2013 and was previously mayor of Tirana, has lead the drive to replace the old theatre, which had fallen into disrepair.

In 2018 Danish practice BIG unveiled plans for a new national theatre for Albania, which would be shaped like a bow tie and feature three auditoriums and a rooftop theatre.

Rama shared the pictures of BIG's designs on his Facebook page yesterday, dismissing protestors as "professional troublemakers" and promising the new theatre would be "another cultural destination of European proportions".

In March this year Albania was approved by the European Council to begin membership talks with the European Union.

"I want to assure you that the new National Theatre will have the consent of all tomorrow," said prime minister Rama. "Both of the many who seek it today and of the few who today do not see further than yesterday."

Rama's political opponents have accused him of acting unconstitutionally, and attempting to take advantage of the coronavirus lockdown to start the demolition.

"At the peak of darkness, the mafia ordered destruction, not only one of Europe's most endangered Cultural Heritage Monuments, but also of any illusion of the existence of the rule of law in Albania," said the president of Albania Ilir Meta on Facebook. 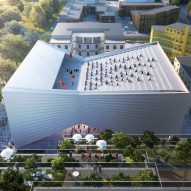 "This is a constitutional, legal and criminal moral crime," he wrote on his post, sharing a video of a digger bringing down part of the theatre's facade.

Dating from the period of Italian occupation, the Teatri Kombëtar was built by Italian architect Giulio Bertè using techniques that were experimental at the time including Populit – panels of prefabricated concrete mixed with wood. Originally a cinema and swimming pool, the building was converted into the national theatre in the late 1940s.

Protesters against its demolition have alleged that the government did not have the proper permits to start work.

The project has been contentious from its inception, with critics accusing the prime minister of a lack of transparency for not holding a design competition and redeveloping the area in a public-private partnership. Prime minister Rama made a special law in 2019 to give private company Fusha the tender to redevelop the theatre – and land to build six towers next to it.

The re-design of Skanderbeg Square, round the corner from the national theatre, by Brussels-based practice p51N4E was a finalist for the prestigious Mies van der Rohe Award in 2019.

In 2017, Italian architect Stefano Boeri presented a masterplan for Tirana 2030, outlining ways of redesigning the capital's public places and planning to build forested parks and biodiversity corridors. Boeri has also designed a vertical forest tower for the city, along with an office block and three schools.

Dutch studio MVRDV has designed a way of converting the city's monument to communism into a technology centre.