Prague studio Ov-a Architekti has built a translucent house and restored a group of 19th-century timber buildings for the office of glass company Lasvit in Nový Bor, Czech Republic.

The architecture studio renovated a pair of existing houses and added black and white house-shaped additions to form the glass brand's headquarters.

Lasvit wanted to continue and build on the history of the existing buildings, which were formerly used as glass workshops, and use the contemporary extensions to communicate the brand's identity.

"The client's task was to create a company headquarters that continues a strong glassmaking tradition and combines glass and light in a contemporary language," project architect Štěpán Valouch told Dezeen.

"The two traditional buildings from the early 19th-century were completed with another two similarly sized and shaped abstract black and white volumes to create a harmonic and functional compound," continued Valouch.

With the existing buildings stripped of adornments that were added in the 1980s and refurbished to create suitable offices, it is the new white house that is the clearest identifier of the company.

Clad in translucent glass tiles, this building connects the two renovated offices and contains a cafe on the ground floor with a meeting room and library of samples under a concrete domed roof on the level above.

The overall form of the building, along with the imprint on the tiles, is designed to be a reinterpretation of slate-shingle-covered houses found in the Česká Lípa region. 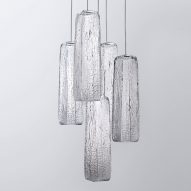 In total, the facades are made from 1,400 tiles, which are supported on a steel frame connected to the building's concrete structure. Each of the square tiles is eight millimetres thick and weighs 7.5 kilograms. The system has been designed so that it can be utilised on other projects in the future.

"The mantle and roof are covered with glass stencils, which were developed in collaboration with Lasvit," explained Valouch.

The second house-shaped addition, which is also derived from the houses in the region, is entirely clad in black metal plates.

This building contains a four-storey space for the display and testing of the company's chandeliers and light-sculptures, which can weigh up to five tonnes.

Lasvit intends on constructing two further buildings on the site to fully enclose the courtyard and complete the city block. One of these buildings will contain a public cafe and further offices, while the purpose of the sixth block is yet to be determined.

Czech glass brand Lasvit has previously collaborated with design firm Yabu Pushelberg to create an illuminated glass Christmas tree and made a set of miniature monsters from glassware for Milan design week in 2018.

The brand also previously collaborated with Kengo Kuma to create a collection of crackled glass lighting.

Photography is by Tomáš Souček unless stated.