Chilean architecture studio Larrou has designed a hotel near a field where sheep graze in Patagonia from wood-clad cabins that were prefabricated.

Aka Patagonia hotel is located on a rural site north of Puerto Natales, a Chilean port city in southern Patagonia.

Elements that form six guest cabins and the communal social area were prefabricated in a shipyard before being transported and assembled on the plot. Each module is then built atop pile foundations in order to have little impact on the environment.

The guest cabins have mono-pitched roofs and a communal dining room has an inverted roof, forming an irregular roofline when seen together. The separate volumes are then linked by an elevated walkway.

Pale wood from the native lenga tree covers the walls and roof, and forms the pathway decking. Larrou chose the wood because it is well equipped to withstand the weather conditions of the area.

"It envelops the project, even the roof, protecting the structure from extreme weather conditions," it said. "The lenga has evolved to grow in places with poor soil, cold climates and strong winds, where no other species can usually adapt."

Larrou left the wood untreated so it will weather over time.

"The aging of the material is a key aspect of the project: achieving a fusion between the built environment and the landscape," it added. "Over time, architecture seeks to adapt to its environment, without competition or pretension, by becoming a part of it."

While the fronts of the cabins have no openings, the rears have large windows with glass doors that open onto private decks. From here guests can enjoy the surrounding views, including expansive fields and Chile's Golfo Almirante Montt canal.

"Aka Patagonia is a tribute to the landscape," said Larrou. "The space was designed so that guests can experience the continuous flow of nature, both inside and out." 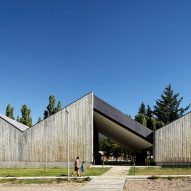 "The roots of this project lie in this concept: encounter and contrast, an architecture that emerges from the earth and becomes part of nature, rupturing forms that rise up like mountains, volcanoes and glaciers on the horizon of Puerto Natales."

Lenga wood also lines the interior walls and ceilings of the guest cabins, which each having a bedroom and bathroom. Darker wood frames the large windows and provides accents in the form of bedside tables and storage.

Details in the hotel rooms include dark, metallic wall lights, white bedsheets and decorative textiles. Wooden furnishings also decorate the communal area including the long dining table and the seating in the lounge.

Patagonia is a region at the southern tip of South America that is shared by Chile and Argentina. Architect Felipe Assadi has similarly built a series of wooden cabins to form a hotel in the Chilean territory for guests to glimpse wild llamas, pumas and rheas in their natural habitat.

Other projects in the area are a museum that Tirado Arquitectos and Bbats Constulting Projects built on a colonial farm.

Photography is by Fernanda Del Villar.