An external walkway and glazed living space are hidden behind sliding slatted woodwork in this house in Chile, designed by architects Santiago Valdivieso and Stefano Rolla.

Rolla and Valdivieso completed the house on Punta Pite, an arm on the Central Chilean coast stretched toward the Pacific Ocean. The architects describe the house as sitting on "a rocky and stormy cliff between two small bays".

Called Engawa House, it is composed of a glass and black steel volume that extends from a cliff to rest on slanted, bold red supports.

Sliding, slatted doors made from the Chilean wood Raulí wrap the house on three sides, giving the residents the option of privacy and natural light, or to open the residence entirely to the exterior views.

"The idea of the project is to generate a house that allows to work both as a refuge and as the opposite; a panorama," said the architects.

"Thus, rather than generating a static relationship with the territory, it creates a medium for change."

The walkway between the glazed structure and slatted wood gives the house its name, Engawa, which is the wooden edging strip typically found in Japanese architecture.

"This intermediate space is the main feature of our project," Rolla added.

Matching slatted woodwork covers the pathway and gives the appearance that the house is a single wood enclosure. 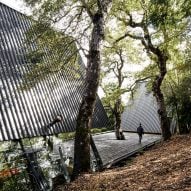 Rolla and Valdivieso placed an open-plan living, kitchen and dining room on the northern side of the house to face the ocean.

In between the kitchen and the dining and living room hangs a black wood-burning stove, while other furnishings are similarly arranged in the centre of the floor to keep the glazed walls free.

White-painted pine wood floors contrast the warmth of the exterior wood deck and extend throughout this main volume, which includes three bedrooms and bathrooms as well as storage arranged to the south.

A black steel stair integrated into the engawa leads from a deck on the north side up to the house's rooftop terrace.

Another stone staircase on the exterior of the property leads underneath the volume, where there is a terrace and a swimming pool.

Engawa House is among a number recently completed Chilean houses designed to make the most of dramatic natural settings.

Others include Casa Malalcahuello, which GAAA completed in Malalcahuell, and Prism House + Terrace Room, which Smiljan Radić completed near a national park.