Dezeen promotion: a community centre in Bangladesh designed by German architect Anna Heringer has won the second edition of the prestigious Obel Award.

Named Anandaloy, which means place of deep joy in the local dialect, the building contains a therapy centre for people with disabilities on the ground floor with a women-led textile workshop above it.

The building was named the second winner of the Obel Award, which is presented annually by the Henrik Frode Obel Foundation to honour "recent and outstanding architectural contributions to human development all over the world".

"To all of us in the jury, Anandaloy is an outstanding project," said Martha Schwartz, chair of the Obel Award 2020 jury and founder of US studio Martha Schwartz Partners.

"It is an original piece," Schwartz continued. "It is not in the style of; it is not imitating something else. I think Anna is absolutely dedicated to what she is doing, which is what you see when you see a good piece of art: that there is a good, focused intent behind it."

"Anna manages to integrate all of her values: she is building sustainably, using the materials that are there, having people involved, so that they can learn to build for themselves, and creating more opportunities for women and for people with disabilities," she added. "You can feel that she has a real respect for the culture, for the people, for the land."

Heringer used rammed earth, made with mud from local ponds, for the structural elements. These include the walls and a ramp that wraps around the building, which was designed to make the community centre inclusive.

"What I want to transmit with this building is that there is a lot of beauty in not following the typical standard pattern," explained Heringer.

"Anandaloy does not follow a simple rectangular layout," she continued. "Rather, the building is dancing, and dancing with it is the ramp that follows it around."

"That ramp is essential because it is the symbol of inclusion. It is the only ramp in the area, and as the most predominant thing about the building, it triggers a lot of questions. In that way, the architecture itself raises awareness of the importance of including everyone."

On the ground of the building's floor, the rammed-earth walls enclose an office, toilet and therapy room for the community centre on one side of the central ramp with a second therapy room and main "living room" on the other side.

Four cave-like spaces have been created alongside this main space within the rammed-earth walls.

"It is important to me to show that it is possible to build a modern two-storey house with simple resources," said Heringer.

"Mud is not just dirt — it is a real building material of high quality that you can use to build very exact structures — not only small huts but also large engineering structures and even public buildings."

Above the therapy centre, the building contains an office, store and workshop for Dipdii Textiles – a clothes-making project launched by Heringer with Veronika Lang and NGO Dipshikha to improve working opportunities for local women.

"The top floor of Anandaloy is also very special to me, because besides the architecture, we are also responsible for the programme, the content," said Heringer.

"Normally, as an architect, you build the vessel, and what goes on inside is not your business. But for us, it is very much our business," she continued.

"The project pushes the boundaries of my work. I see myself very much as an architect but also as a social worker and as an activist." 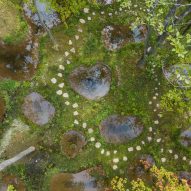 Bamboo from a local forest was used to create a veranda around the building and for its ceilings and roof. The natural materials mean that at the end of the building's life it can decompose.

"I want to make decomposable buildings; I don't want to leave waste behind," explained Heringer. "We can never foresee what the coming generations need — but what I really want to remain is the knowhow."

To find out more about the Obel Award visit the Henrik Frode Obel Foundation's website.

Photography is by Kurt Hoerbs.

This article was written by Dezeen for Obel Award as part of a partnership. Find out more about Dezeen partnership content here.