The geometric Jupe pods, named after the planet Jupiter, are intended as a futuristic alternative to traditional glamping tents and yurts.

"We turned to ideas that inspired and excited us," said Jupe co-founder and micro-home entrepreneur Jeff Wilson.

"Remember that monolith from 2001: A Space Odyssey? It last sent signals to Jupiter from the moon. It seems that a few of those blueprints were bounced back to Earth. We intercepted them and created Jupe."

Fire-resistant canvas stretched over aluminium poles forms the angular pod, which slopes upwards to a ceiling height of 11 metres at the tallest point.

LEDs along the poles can be used to provide illumination in the dark.

Jupe is designed to function off-grid with the light-up frame, wifi, electrical outlets and USB ports powered by solar panels or battery packs.

"Experiencing the natural wonders of the world shouldn't mean being forced to disconnect while staying in a less-than-inspirational living space," said Wilson.

Extras offered by the company include a porch, a lockable safe, a cooler, speakers and an Amazon Alexa voice-controlled device.

Each shelter sits on a chassis that raises the tented part off the ground. Birch floor tiles lift up to allow occupants to access storage space below, which Jupe's designers estimate can hold up to ten suitcases. 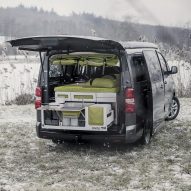 Nestbox is a modular trunk extension that turns cars into campers

The entrance to the 111-square-metre cabin can be left open to frame the landscape, and slim openable windows in the side provide extra ventilation.

A palette of sand tones was selected for the interior of the pods, which are designed by boutique hotel designer Liz Lambert and Cameron Sinclair, who was previously Airbnb's head of social innovation and co-founder of Architecture for Humanity.

A step leads up to a platform with a full-size bed with a mattress and bedside cubbies are slightly sunken into the floor. Built-in furniture includes a desk, a chair and an ottoman.

The company has made the pods, which are manufactured in a Los Angeles factory, available for pre-order now, with the first flatpack kits due to be delivered in January 2021.

Photography is by Sam Gezari.