Weathering steel encloses the entrance area and open-tread staircase inside the split-level King Edward Residence that Atelier Schwimmer has built in Montreal, Canada.

Located in the town of Côte Saint-Luc, the 260-square-metre dwelling is a replacement of a young couple's existing 1950s house that was destroyed by a fire.

Montreal studio Atelier Schwimmer's design was developed as a contemporary interpretation of the original dwelling, which had a split-level layout the client wanted to recreate.

However, it was repositioned to the edge of the plot to maximise outdoor space for the client and improve access around the dwelling.

"This home is seated on King-Edward Street where split-level typology abounds, typical of 1950s houses when the street first got built," said Atelier Schwimmer.

"It is one such residence that stood on this site before a fire ravaged it. Its owner, a young couple, had chosen it among several others because it met their programmatic needs and their preferred layout."

"Mandated to replace it, we have proposed a new form rooted in a reinterpretation of the split-level typology while reconsidering the house insertion to the lot," the studio explained.

"The new house is made of rectangular boxes stacked in a way to create a large accommodating backyard, in opposition to the previous house – a cube in the middle of the lot."

King Edward Residence takes the form of three "rectangular boxes" arranged as a U-shape in plan. They are wrapped in black metal cladding and dark Ashberry Velour brick, punctured by large areas of glazing.

Its form was developed to maximise space inside but it also helps to "shield" the dwelling from views of an imposing 10-storey building at the south side of the site.

The home's entrance is positioned beside the garage, both of which are set back from the main street-facing facade to create a sheltered porch.

It opens out to reveal unexpectedly light, white-walled interiors and leads into an open-plan kitchen, dining and sitting room on the ground floor.

The upper levels of the dwelling contain a playroom, three bedrooms, two bathrooms, a family room and an office, and there is also a partially-submerged basement. 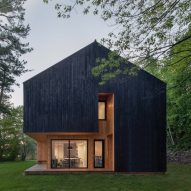 The pared-back, white interiors continue throughout the dwelling, with the only decoration being timber flooring and walls of weathered-steel in the entrance area and around the open-tread stair.

Weathered steel was chosen by Atelier Schwimmer for its warm and "protective" qualities and is intended to "accentuate threshold spaces" inside.

The open-tread staircase forms the heart of the dwelling, occupying a nine-metre-high void lit by a skylight.

It connects all four split-levels of the dwelling and is framed through a floor-to-ceiling window in the office on the top floor.

Atelier Schwimmer is a design studio based in Montreal that is led by Felix Schwimmer. Elsewhere, it recently completed a two-toned chalet for two siblings beside Lake Brome.

Other recently completed Canadian residences featured on Dezeen include the Walker dwelling by Reflect Architecture that features a blue slide and TBA's pale extension to a historic red brick home.