The four-legged machine, which can walk up and downstairs and move across uneven ground, is being used to regularly scan the site to monitor progress at Battersea Roof Gardens.

A video shows Spot being welcomed into the office and presented with its own Foster + Partners lanyard and ID card, before accompanying architects around the site and performing a scan.

This information Spot collects is fed back to Foster + Partners and used to build and update a "digital twin" model of the project as it is built. The model can be used to compare the design to the built reality.

The architecture firm's Applied Research + Development group (ARD) collaborated with American engineering firm Boston Dynamics to explore how a robot such as Spot can be used in the context of construction.

Spot is remote controlled and follows a pre-mapped route again and again. The robot's four feet help it cope with rough terrain and it can explore sites that might be hazardous or uncomfortable for humans.

As well as its own sensors, Spot can carry up to 14 kilograms of equipment.

At Battersea Roof Gardens, the robot dog is able to monitor construction as it progresses, something Foster + Partners said was very useful when different teams of contractors are on site.

Spot returns weekly to follow its route and perform its scan of the site.

"The ability of Spot to repeatedly and effortlessly complete routine scans, in an ever-changing environment was invaluable not only in terms of the consistency but also the large amount of high-quality data collected," said Foster + Partners partner Martha Tsigkari.

"Through this process, we developed a sequence of scans that may help us track the project progress against timeframes as well as facilitate regular comparisons against the BIM model," she added. 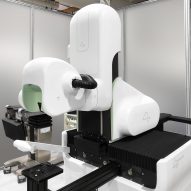 "Our scans can ensure that very quick and accurate changes to the newly designed system could be made to accommodate the differences captured by the scans – all in a matter of days. This could result in savings both in terms of time and money."

Battersea Roof Gardens is part of the conversion of Battersea Power Station, a decommissioned coal-fired power plant, into a mixed-use complex that will include apartments, a hotel with a rooftop infinity pool and an Apple headquarters.

Battersea Roof Gardens is part of phase three of the redevelopment and will encompass housing and a 250-metre-long garden overlooking the Thames. Foster + Partners, the architecture firm founded by Norman Foster in 1967, is collaborating on phase three with Frank Gehry's architecture practice.

Boston Dynamics was founded in 1992 as a spin-off from MIT. In 2018 the company announced it would make a miniature version of Spot for an office environment.