American automotive company General Motors has made its first substantial logo change in more than half a century as part of its pivot towards electric vehicles.

The all-caps acronym that has featured in the General Motors logo since 1938 has been lowercased, with the negative space around the 'm' suggesting the shape of an electrical plug.

Its navy backdrop has been replaced by a rounded, bright blue gradient border to evoke "the clear skies of a zero-emissions future," General Motors (GM) said.

The company owns brands including Chevrolet, GMC and Cadillac, and has committed itself to going fully electric in a bid to rival the success of electric vehicle manufacturers like Tesla, which recently made Elon Musk the richest person on Earth.

"GM has the talent, technology and ambition to advance a safer world for all, help reduce emissions and accelerate toward our all-electric future," said GM's global chief marketing officer Deborah Wahl.

Although not as markedly different as some other recent rebrands, such as the Burger King and controversial CIA logo, the design marks a considerable change for GM.

Up until now, the company's logo has remained largely the same since 1964, with the same thickly underlined, white letters superimposed on more or less shaded versions of a navy blue backdrop.

Paying respect to the "history and trust" inherent in this original design, the new logo retains most of its core elements, including the bold stroke that now underlines only the m.

The resulting design is made for digital environments, rather than being featured on the company's actual cars. It will be debuted in an advertising campaign called Everybody In, which aims to challenge stereotypes about the kind of person who drives an EV. 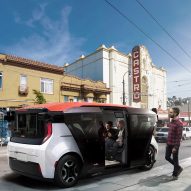 By 2025, GM is set to release 30 new electric vehicles (EVs) across its brands, totalling more than $27 billion in spending and exceeding the company's gas and diesel investment.

"There are moments in history when everything changes," said Wahl.

"We believe such a point is upon us for the mass adoption of electric vehicles. Unlike ever before, we have the solutions, capability, technology and scale to put everyone in an EV. Our new brand identity and campaign are designed to reflect this."

Upcoming releases in GM's push towards an "all-electric future" include the self-driving Origin car the company designed together with autonomous vehicle start-up Cruise, as well as the GMC Hummer EV.

Touted as "the world's first all-electric supertruck" the car is set to be released in 2021 followed by three other GMCs as well as four EVs each from Chevrolet and Cadillac.