"Super September" will see a hectic programme of fairs and events taking place in cities across Europe and China. As well as regular September events, such as the London Design Festival, the month will also hold a number of fairs that had been moved or postponed.

For many brands, this September will mark the first opportunity to show their products at a physical event in over a year, as the coronavirus pandemic forced most 2020 design shows to move to online-only events.

The latter, which last took place in April 2019, will take the form of a special "Supersalone" event curated by architect Stefano Boeri that will be open to the public, who will be able to buy products.

French fair MIPIM to be followed by Maison & Objet

Frech property fair MIPIM has also made the leap to September, after its events in March 2020 and June 2021 were cancelled. The vast real-estate blowout will now be held in Cannes from 7 to 8 September.

Maison & Objet, France’s biannual trade show for decoration, lifestyle and design, will take place in Paris from 9 to 13 September. It will host a series of digital fairs, as well as a physical exhibition and an off-site tour in Paris, which runs in conjunction with Paris Design Week.

Helsinki Design Week takes place at more or less the same time, running from 3 to 13 September. This year the event has the theme Wisdom, and will feature exhibitions, discussion forums and meeting places for design professionals and enthusiasts.

Next up is 3 Days of Design in Copenhagen, which runs between 16 and 18 September. This was one of the few trade shows to hold a physical event last year after the fair was moved from its usual May slot to the late summer. This year, it has decided to retain its September date.

This will be followed by the London Design Festival from 18 to 26 September. The festival, which usually is spread out over numerous districts across London, was held in 2020 but it was a "quiet affair."

The 2021 edition will feature an art initiative by designer Yinka Ilori and a mixed reality installation, Architecture + Reality (A+R) by architect Sou Fujimoto and mixed reality studio Tin Drum. A new festival commission will see each design district be given its own sculptural waymaker.

Design Miami Basel, which is curated by Aric Chen, overlaps London Design Festival this year and takes place between 21 and 26 September. The 15th edition of the event, which showcases collectable design from designers and galleries around the world, was set to take place in June as usual but has been moved to September due to the pandemic.

Stockholm Creative Edition, a newcomer to the scene, will showcase Swedish design on 23 to 29 September. Visitors can check out showrooms, studios and exhibition openings across the city, as well as pop-up spaces.

Another regular September fixture, Vienna Design Week (between 24 September and 3 October), takes place at the same time. Austria’s largest curated design festival will be the first under new management and will showcase architecture, product, furniture, industrial and graphic design.

Also starting on September 24 is Design China Beijing, a three-day festival that features both local talent and international designers. Talks from more than 30 design icons are on the schedule, with names including Amanda Levete, Morag Myerscough and Zhang Zhoujie. The festival ends on September 27. 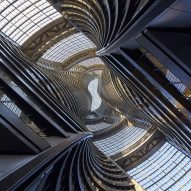 Finishing up the month is Stockholm Craft Week from 30 September to 3 October. Forty-two exhibitors will show their work at the event, which aims to increase awareness of craft as an art form.

Other key international events taking place include the Seoul Biennale of Architecture and Urbanism (between 6 September and 9 November) and the Chicago Architecture Biennial (throughout September).

Main image is by Chiara Venegoni.