Designed as a family home for one of the Ghent-based practice's co-founders, Basile Graux, the new extension has been blended into the existing structure by wrapping everything in grey plywood-plank cladding.

"We absolutely wanted to avoid the clash between old and new, and so the basic idea was born for a harmonious extension of the existing structure," explained the studio.

The natural split between the original house and the new addition has been interpreted as two wings – a "day wing" to the south containing living, kitchen and dining spaces, and a "night wing" to the north containing bedrooms and bathrooms.

"The existing part – the night wing – became a more introverted area, and the extension a generous, light-filled day wing," described the studio.

The new wing sits at a slight angle to the old to maximise the angle of sunlight into the spaces, and the resulting triangular area between the two wings forms an entrance hall.

Almost all of the existing structure was kept intact, with its smaller openings and lower ceiling heights used to create a more intimate atmosphere in the night wing.

The most dramatic change is a new corridor that bisects the original structure and frames views into the new wing. This is wide enough to double as an informal social or play space. 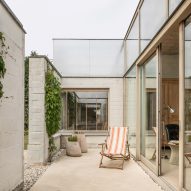 Following a gentle slope in the landscape, the new wing steps downwards into a sunken concrete base, expressed externally as a concrete plinth that mirrors the white brick base of the original chalet.

This concrete base creates a low datum around the interior, doubling as long benches and window sills and visually extending to the central fireplace in the lighter day wing.

Large timber-framed windows capture views out towards the surrounding countryside, with a glazed section wrapping around the southern corner where a sliding door opens out onto a small area of decking.

Unlike the old wing's lower ceilings, the gable roof in the new wing is expressed internally and finished in white plaster, further emphasising the feeling of space.

"In contrast to the withdrawn character of the old wing, the openness of the day wing is contrasted up to the ridge of the gable roof, with large ceiling-high windows that perfectly frame the surroundings," Graux & Baeyens said.

Graux & Baeyens recently completed another renovation of a 1960s building in Belgium, modernising and adding new flexible spaces to a brick bungalow in De Haan.

In 2019, the studio built a three-volume brick home in Belgium that made the most of the site's natural light and overlooks its wetland surroundings.