Brazilian architecture firm Superlimão has overhauled a large home in São Paulo, relocating the staircase to the facade and painting the front a deep shade of red.

The Yoga House project was completed for an enterprising couple that wanted to convert a portion of their home into a yoga studio, a co-working space and a rental bedroom, all on the same property.

The original building was constructed in the 1990s and is located in Vila Madalena, a trendy area of São Paulo.

"[The] project had to accommodate a large room for classes, a reception area on the ground floor, a studio and co-working area on the top floor, and a room for rental in the old smaller house in the back," the team explained. On completion, the project encompasses an area of 310 square metres.

In order to create more room inside the house, the Superlimão team relocated the staircase to the front of the building, facing the street.

This allows separate access to visitors using the ground floor spaces and those going upstairs.

The steel structure was painted red, along with the rest of the exterior of the house.

By removing walls within the home as well as the staircase, Superlimão was able to bring much more light to the interiors. 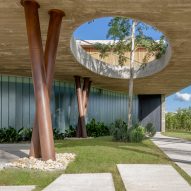 The yoga studio and its associated functions occupy the ground floor, while the co-working area is found upstairs.

A formerly tiled area between the main home and the guest house was converted into a garden, giving yogis a view of the outdoors as they practice.

"The ceramic tiles of the outdoor area were replaced by a garden with relaxation areas, featuring an architectural style that conveys a calm and soothing environment, with a more neutral and cosy colour palette and natural elements," explained Superlimão.

"The light-colored walls and curved corners helped heighten the warm and welcoming feel of the environment," the team added.

A much more muted palette indoors contrasts the bright red facade, lending the spaces a bright and welcoming feeling.

Superlimão is based in São Paulo and has completed several other projects in the city, including the conversion of an old warehouse into a minimalist dental studio and a historic apartment in which vivid colors were combined with traditional building elements.

The photography is by Israel Gollino.