The studio has won planning permission to create a two-bedroom holiday rental property within the bunker, which was originally built in 1939 but has long been abandoned.

"We are taking a windowless concrete world war two bunker that sits within an earth mound and has not been uncovered for over 70 years, and opening up several 'bomb blast' openings with glazing behind," said Lipton Plant Architects co-founder Edward Lipton.

"We are preparing spaces to receive views, light, inhabitants for the first time," he told Dezeen.

Created as part of the Chain Home radar detection system – a ring of radar stations built by the Royal Air Force during world war two – the 76-square-metre bunker is located near Weymouth on the south coast of the UK.

The bunker's interior will be converted into two bedrooms alongside a kitchen, living space and bathroom.

As the bunker has no windows, the studio is creating two bomb-blast-shaped windows to allow light into the holiday home. One will be in the living space and the other in one of the bedrooms. 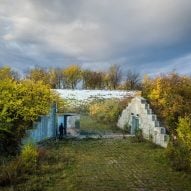 "A play on the building's history, the windows create an illusion, a modern, domestic, high-tech and sustainable home, reflecting and receiving not radar from the darkness, but light," explained Lipton.

"This new view from the bunker, through the woodland out across the land and seascape, has no threat on the horizon!"

With the exception of the bomb-blast windows, the external appearance of the bunker will remain largely the same.

Internally the holiday home will have exposed concrete walls, as the architecture studio aims to retain the original feel of the building. 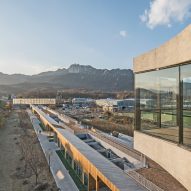 "We are working with the bunker, not against it," said Lipton.

"We have interrogated its materials, colours, textures, details, previous use and equipment and have put together a recognisable relevant pallet but playing with those references to provide a space that is unique, specific, playful but true to its past."

Along with holiday homes, like this one in the Netherlands, bunkers are being converted into a variety of uses.

Petr Hájek Architekti created a pet crematorium within a Cold War bunker in the Czech Republic, while South Korean studio CoRe Architects transformed a tank bunker near Seoul into a creative hub.