Sewell begun her Key Workers art project in a bid to "say a visual thank you" to those who have remained working during the Covid-19 pandemic. The masks are not intended as personal protective equipment (PPE) but are rather decorative celebration of frontline workers.

Each of the eight main groups of key workers outlined by the government, including health and social care, education and childcare, key public services and local and national government, has been given its own vibrant, symbolic mask design.

Other groups include workers in the food and other necessary goods industries, public safety and national security staff, utilities, communication and financial services personnel, and transport workers.

Each ornamental mask has been made using only the materials Sewell happened to have in her home during lockdown. These materials are also exclusively recycled, reclaimed, or biodegradable.

The designer drew on fashions and styles found in science fiction films and television series such as Star Trek when creating the pieces, which place heavy emphasis on symmetry.

She also took cues from religious motifs in an attempt to form "high status images" that would serve as a celebration of the individuals for whom they're made.

This includes Buddhism in particular, as the designer was directly inspired by Thangka paintings, which are typically used as aids in meditational practices.

In addition to expressing her thanks to those who have remained working throughout the pandemic, Sewell also wanted to bring attention to some of the key jobs that often go unrecognised.

"The face mask is 2020's most iconic and important visual motif," said Sewell. "It has moved from being a simple piece of Personal Protective Equipment (PPE) to a badge of honour, worn by the heroes who have kept our society functioning during the most disruptive collective experience since World War II."

"Artists and designers are using this motif within their work to help reframe our perception, its inclusion in stunning images and positive narratives encourages the daily use of them by the public, a critical step in shaping our choices moving forward," she added.

For the health and social care workers' mask, Sewell wanted to bring the classic "superhero" look of an eye-mask and a cape to life.

"The first thing I think when I see images of the exhausted and battered nurses and doctors is that they are real life superheroes, putting their lives at risk and battling the 'forces of evil' corona virus on the front line," Sewell told Dezeen.

Based on standard PPE masks used by frontline healthcare workers, she pleated and stitched a piece of sky blue-hued cotton linen from a used theatre costume to create a dramatic mask that covers the wearer's face and neck like a "suit of armour".

This is worn over an eye piece that has been repurposed from an old halloween mask.

When designing the silver mask symbolising the utilities, communication and financial services sector, Sewell wanted to celebrate the connection brought into our lives by technology.

"Much of my work focuses on finding this connection through meditation and other Buddhist practises, so there's really a few things coming together into what I hope is a synergetic balance," she explained.

She made the chain mail-like face mask from one of her tops, while the circular headpiece was fashioned from various metal wires found around her house.

The chest piece was made from old heat sinks that were left over from the designer's previous lighting project.

In honour of key public service workers, which include those working in prisons and courts, religious staff, charities and more, Sewell wanted to focus on one group in particular: journalists and broadcasters.

She chose the vibrant red hue in reference to the BBC, and created a headpiece featuring three objects made to look like microphones.

The mesh-like mask itself is made from a piece of paper art by Torafu Architects called Air Vase, which the designer brought back from Japan after a past trip.

Sewell used the remnants of a broken plastic crate to make her mask representing the local and national government, which is informed by the ubiquitous navy blue suit and the government seal used on all official documents.

The mask that symbols those working in food and other necessary goods, on the other hand, was formed from green felt made of recycled content.

The design, which draws on the fashion and images found in science fiction, features an undulating headpiece reminiscent of a flower or insect as a nod to the produce and crops grown on farms.

More commonplace materials were used to make the neon green public safety and national security mask, which is built from a yoghurt pot, two beer cans and scraps of fabric and paper. The headpiece, however, is made from a painted pool table triangle.

The mask designed in homage of transport workers is based on London's famous roundel, while the headpiece was informed by car grills and trains.

Yellow paper was used to make the round shield-like mask characterising education and childcare workers, which is complemented by a yellow teddy bear. 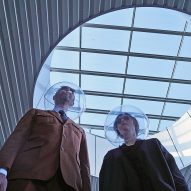 Sewell is not the only designer to put a creative spin on face masks. Berlin-based art collective Plastique Fantastique made an open-source, retro-futuristic face shield shaped like a fish bowl, while Metaform Architects created customisable face shields for children.

Photography is by Sara Marinangeli.